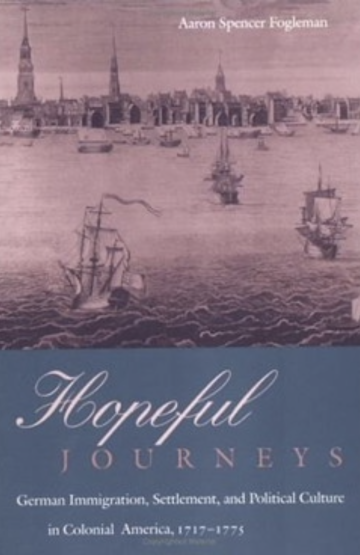 In 1700, some 250,000 white and black inhabitants populated the thirteen American colonies, with the vast majority of whites either born in England or descended from English immigrants. By 1776, the non-Native American population had increased tenfold, and non-English Europeans and Africans dominated new immigration. Of all the European immigrant groups, the Germans may have been the largest.

Aaron Spencer Fogleman has written the first comprehensive history of this eighteenth-century German settlement of North America. Utilizing a vast body of published and archival sources, many of them never before made accessible outside of Germany, Fogleman emphasizes the importance of German immigration to colonial America, the European context of the Germans' emigration, and the importance of networks to their success in America

Aaron Spencer Fogleman is Professor of History at Northern Illinois University. He is the author of Jesus Is Female: Moravians and Radical Religion in Early America, also published by the University of Pennsylvania Press.