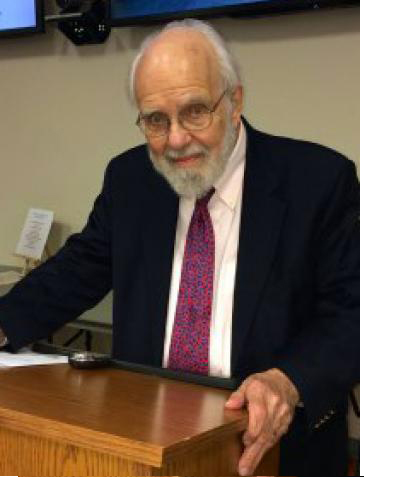 The eminent historian Richard S. Dunn died on January 24, 2022, at the age of 93. He was the Roy F. and Jeannette P. Nichols Professor of American History Emeritus at the University of Pennsylvania, Director Emeritus of the McNeil Center for Early American Studies, and Co-Executive Officer Emeritus of the American Philosophical Society.

Dunn was born on August 9, 1928, in Minneapolis, Minnesota, the son of William P. Dunn, a professor of English literature at the University of Minnesota, and Elizabeth Slator Dunn.

Dunn pursued his undergraduate studies at Harvard University, graduating Phi Beta Kappa in 1950.  Influenced by his father’s scholarly interests, he focused on early modern English history and literature and wrote his thesis on Archbishop William Laud, a prominent figure in the English Civil War. He enrolled in the PhD program at Princeton University intending to continue studying seventeenth-century English history but became interested in developments on the other side of the Atlantic. His dissertation became his first book, Puritans and Yankees: The Winthrop Dynasty of New England, 1630-1717.

Puritans and Yankees established several enduring themes in Dunn’s scholarship: a fascination not with the “founding” era of colonial North American history or the age of the American Revolution but with the still poorly understood period in between, when Anglo-American society achieved its distinctive shape; a conviction that American history cannot be studied in isolation from European history; that a transatlantic perspective is crucial; and that the decisions of individual actors, indeed their individual moral decisions, shape the course of historical developments.

Early in his career, Dunn continued to consider himself primarily an historian of Tudor and Stuart England. His first faculty appointment, at the University of Michigan from 1955 to 1957 was in that field, and when he was recruited to revitalize early American history at the University of Pennsylvania, he insisted on teaching English history as well. In this spirit, he wrote his second major book, The Age of Religious Wars, 1559–1689, published in 1970 as part of a multi-authored six-volume history of modern Europe. Dunn almost immediately decided that—as with the Winthrop family—the story had to continue into the eighteenth century, and so in 1979 he published an expanded edition extending the narrative to 1715. In its two editions, the book sold over 100,000 copies and became a staple in many undergraduate courses on early modern European history.

Dunn then set out to write a broad, transatlantic study of the event that he had found so important for the Winthrop family, the Glorious Revolution. As he immersed himself in archival material, he began to wonder why England’s Caribbean colonies had apparently not participated in the upheavals and discovered a rich vein of previously unexplored materials on the political and demographic history of Barbados that took him down a very different path. The book on the Glorious Revolution was never written, although in 2001 Dunn did publish an important essay on the subject for The Oxford History of the British Empire.

Instead, he wrote his most influential book, Sugar and Slaves: The Rise of the Planter Class in the English West Indies, 1624–1713, which appeared in 1972.  It combined quantitative and qualitative methods to reconstruct how a ruthless group of English men exploited enslaved African workers to extract great riches from the sugar plantations they carved out in the seventeenth-century Caribbean and along the way “made their beautiful islands almost uninhabitable.”  One reviewer praised Sugar and Slaves as “a model of research and analysis,” while another noted Dunn’s great achievement in “filling in with meticulous detail the processes by which island society came in to being.”

Soon after arriving at the University of Pennsylvania in Philadelphia, he met Mary Maples, a fellow historian then teaching at Bryn Mawr. She was writing a major intellectual biography of William Penn, and, like Dunn, she was using biography as a means to study influences between English thought and the development of colonial America at the turn of the eighteenth century.  They shared more than just intellectual interests, however, and they married in 1960.

From 1972 to 1977, Dunn chaired Penn’s history department during a period of considerable expansion and change. Thanks in large part to his efforts, the department recruited its first tenured women faculty members.

When Dunn stepped down as chair, he submitted a proposal to the Mellon Foundation to create a center for early American studies. Under the influence of Mary Maples Dunn and a host of his graduate students who were researching Pennsylvania, New Jersey, and New York, and simply by the fact of living and teaching in Philadelphia, Dunn had developed an interest in early Pennsylvania history. Dunn’s vision was for a research center that would focus on the middle colonies in the wider Atlantic world, rather than the New England and Virginia topics that then still dominated the field, would further collaboration among faculty and researchers at Philadelphia-area archives, universities, and colleges, and would place a particular emphasis on support for graduate students and junior scholars.

That vision inspired the creation of the Philadelphia Center for Early American Studies, which Dunn directed from its founding in 1978 until 2000. Operating on a shoestring budget for most of that period, the Center offered fellowships to graduate students from Penn and, distinctively, from other universities, who were writing dissertations based in Philadelphia-area archives.

One of the first major projects of the Philadelphia Center was the preparation of a five-volume edition of The Papers of William Penn, published between 1981 and 1987 by the University of Pennsylvania Press under the general editorship of Mary and Richard Dunn. The National Endowment for the Humanities provided substantial matching funds for this work, and the main donor to the match was Robert L. McNeil, Jr., whom the Dunns had first met through his support of the Philadelphia: A 300-Year History project. Dunn’s relationship with McNeil, and McNeil’s enthusiasm for the work of the Philadelphia Center, deepened over the years, culminating in generous gifts that led to the renaming of the Center and the endowment of its directorship in Dunn’s name in 1998. When Dunn stepped down as director in 2000, what was now known the McNeil Center for Early American Studies had become a prestigious international research institution.

Dunn, who had won the university’s Lindback Teaching Award in 1993, retired from the Penn History Department in 1996, having supervised more than thirty doctoral dissertations. Among the numerous honors he had won during his career, was a Guggenheim Fellowship in 1966–1967, an American Council of Learned Societies Fellowship in 1977, and appointments as a Fellow of Queen’s College and the Harmsworth Professor of American History at Oxford University in 1987–1988.

Dunn may have retired from teaching, but his scholarly career continued to flourish. In 1996, after thirty years of work with his collaborator Laetitia Yaendel, he published an edition of The Journal of John Winthrop, which returned him to the subject of his first book and solidified his reputation as a careful scholarly editor.

Then a new chapter in Dunn’s professional life opened in 2002 when he and Mary Maples Dunn agreed to serve as Co-Executive Officers of the American Philosophical Society.  Mary Maples Dunn brought experiences garnered over her distinguished administrative career, as Dean at Bryn Mawr College, President of Smith College, and acting President of Radcliffe College during its merger with Harvard University and its transition into the Radcliffe Institute for Advanced Study, where she became Dean. Richard Dunn, in turn, had a long history with the APS.  In the 1960s, it had supported his research in England for Sugar and Slaves, and he later received another grant for The Papers of William Penn. Throughout the 1980s and 1990s, Dunn had worked closely with the APS through the McNeil Center, and when he was elected a member of the Society in 1998, he became more involved in its scholarly life.

As Co-Executive Officer, Dunn established an office at the APS Library, and made the Society’s research programs his priority. One of Dunn’s particular interests was an ambitious sabbatical fellowship program funded by the Andrew W. Mellon Foundation.  The fellowships targeted mid-career scholars who might find relocating from their academic homes challenging, an experience that the Dunns understood well from their own time juggling careers and family. They also created a transatlantic exchange of scholars through a partnership with the Alexander von Humboldt Foundation, and oversaw the early years of the APS Museum. The hallmark of the Dunns’ tenure at the APS was the successful completion of a $35-million capital campaign.

When Richard and Mary Dunn retired from the APS in 2007, he returned to the study he had first begun nearly forty years previously. As powerful as the story of Sugar and Slaves had been, Dunn was the first to admit that it was primarily about the planter class, not the enslaved people on whom their rise depended. He thus embarked on an effort to recover what he could of the lives of those in bondage. The result was the prize-winning A Tale of Two Plantations: Slave Life and Labor in Jamaica and Virginia (2014), a painstaking reconstruction of the individual and collective experiences of three generations of enslaved people on the sugar estates of Mesopotamia in Jamaica and Mount Airy in tidewater Virginia. At the time of his death, Dunn was nearing completion of an abbreviated version of A Tale of Two Plantations specifically designed for classroom use, and plans are underway to publish this work posthumously.

Professor Dunn passed away in Winston-Salem, North Carolina, surrounded by his family. After 57 years of marriage, Mary Maples Dunn pre-deceased him in 2017. He is survived by his daughter Rebecca Cofrin Dunn of Winston-Salem, daughter-in-law Andrea Kurtz, granddaughter Cady B Marie Dunn, daughter Cecilia Dunn of Newton, Massachusetts, son-in-law Lee Campbell, and grandsons Benjamin Dunn Campbell and Frederic David Campbell. Donations in his honor may be made to the McNeil Center for Early American Studies, the American Philosophical Society, or Smith College.

Please email mceas@sas.upenn.edu with memories, thoughts, and vignettes about Richard’s impact on you and your work, and we can include your thoughts on this webpage. We intend to hold a memorial event for Richard when the pandemic situation allows and will keep you abreast of plans.