Friends and Strangers: The Making of a Creole Culture in Colonial Pennsylvania 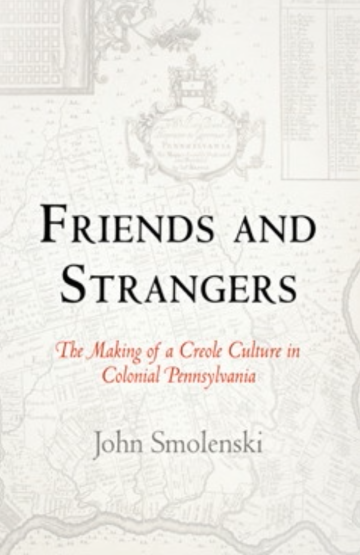 In its early years, William Penn's "Peaceable Kingdom" was anything but. Pennsylvania's governing institutions were faced with daunting challenges: Native Americans proved far less docile than Penn had hoped, the colony's non-English settlers were loath to accept Quaker authority, and Friends themselves were divided by grievous factional struggles. Yet out of this chaos emerged a colony hailed by contemporary and modern observers alike as the most liberal, tolerant, and harmonious in British America.

In Friends and Strangers, John Smolenski argues that Pennsylvania's early history can best be understood through the lens of creolization—the process by which Old World habits, values, and practices were transformed in a New World setting. Unable simply to transplant English political and legal traditions across the Atlantic, Quaker leaders gradually forged a creole civic culture that secured Quaker authority in an increasingly diverse colony. By mythologizing the colony's early settlement and casting Friends as the ideal guardians of its uniquely free and peaceful society, they succeeded in establishing a shared civic culture in which Quaker dominance seemed natural and just.

The first history of Pennsylvania's founding in more than forty years, Friends and Strangers offers a provocative new look at the transfer of English culture to North America. Setting Pennsylvania in the context of the broader Atlantic phenomenon of creolization, Smolenski's account of the Quaker colony's origins reveals the vital role this process played in creating early American society.

John Smolenski is Associate Professor of History at the University of California, Davis. He is coeditor, with Thomas J. Humphrey, of New World Orders: Violence, Sanction, and Authority in the Colonial Americas, also available from the University of Pennsylvania Press.