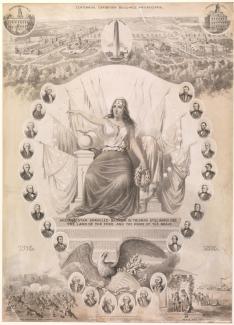 War was a more usual state of affairs than peace in the early modern Atlantic, and there are few scholars who would deny its importance for understanding this imperial age. Nevertheless, the impact of almost constant warfare on everyday social and economic development remains underappreciated. Vincent Brown’s recent study of Tacky’s Revolt in Jamaica and a number of books charting the domestic disruptions that came with the American Revolution plainly highlight the all-encompassing influence of war on every aspect of daily life in Atlantic societies. In many ways war made the Atlantic world – as an arena of interaction, as an economic entity, and as a place of inter-racial conflict. Rather than being a sporadic and bothersome disruption, war was a permanent constraint of life in the early modern Atlantic world. At the same time, the nature of armed conflict in this world redrew the very boundaries that had customarily distinguished war from violence.

Inspired by the commissioning and production of The Oxford Handbook of the Seven Years’ War, this conference welcomes proposals from scholars at all stages of their careers, and from all relevant disciplines, who are exploring war’s impact on the early Americas and the Atlantic world. We will accept proposals from individuals as well as complete panels. Potential topics may include:

- race, slavery, and imperial warfare
- capitalism and war
- conflict involving Indigenous peoples
- gender and warfare
- local economies of warfare
- narratives and representations of war in literature
- art and war
- the science of war
- climate and war
- diplomacy and peace studies

We envisage that the event will have the potential to produce an edited collection of essays or special journal issue, while also invigorating the forty-odd scholars who are engaged in producing the Oxford Handbook, many of whom will attend the conference and will contribute either by presenting their work-in-progress or by offering formal and informal comments. If you wish to propose a paper, please submit an abstract (250 words) and a short curriculum vitae to mceas@sas.upenn.edu no later than May 15, 2022. Proposals for panels should include abstracts and CVs for each participant, as well as a title and brief description of the panel as a whole. Most papers will be pre-circulated in order to encourage constructive dialogue during a working conference. Texts of approximately 5,000 words exclusive of notes will be due no later than October 17, 2022 for pre-circulation.

This will be a hybrid conference and some support for travel and lodging will be provided to participants who can attend in person. All onsite attendees must show a vaccination card and comply with the University of Pennsylvania’s policies regarding COVID-19; current protocols can be found at https://coronavirus.upenn.edu/content/visitors.

Image: George Stinson & Co. In remembrance of the one hundredth anniversary of the independence of the United States. Courtesy of The Library Company of Philadelphia