The Way of Improvement Leads Home: Philip Vickers Fithian and the Rural Enlightenment in Early America 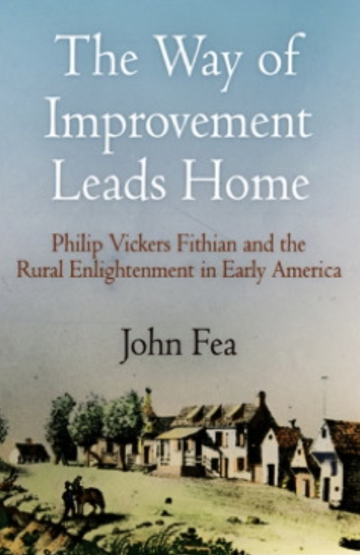 The Way of Improvement Leads Home traces the short but fascinating life of Philip Vickers Fithian, one of the most prolific diarists in early America. Born to Presbyterian grain-growers in rural New Jersey, he was never quite satisfied with the agricultural life he seemed destined to inherit. Fithian longed for something more—to improve himself in a revolutionary world that was making upward mobility possible. While Fithian is best known for the diary that he wrote in 1773-74 while working as a tutor at Nomini Hall, the Virginia plantation of Robert Carter, this first full biography moves beyond his experience in the Old Dominion to examine his inner life, his experience in the early American backcountry, his love affair with Elizabeth Beatty, and his role as a Revolutionary War chaplain.

From the villages of New Jersey, Fithian was able to participate indirectly in the eighteenth-century republic of letters—a transatlantic intellectual community sustained through sociability, print, and the pursuit of mutual improvement. The republic of letters was above all else a rational republic, with little tolerance for those unable to rid themselves of parochial passions. Participation required a commitment to self-improvement that demanded a belief in the Enlightenment values of human potential and social progress. Although Fithian was deeply committed to these values, he constantly struggled to reconcile his quest for a cosmopolitan life with his love of home. As John Fea argues, it was the people, the religious culture, and the very landscape of his "native sod" that continued to hold Fithian's affections and enabled him to live a life worthy of a man of letters.

John Fea is Associate Professor of History at Messiah College in Grantham, Pennsylvania.