Unwelcome Americans: Living on the Margin in Early New England 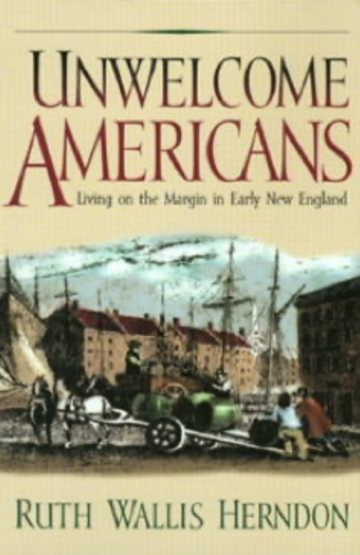 In eighteenth-century America, no centralized system of welfare existed to assist people who found themselves without food, medical care, or shelter. Any poor relief available was provided through local taxes, and these funds were quickly exhausted. By the end of the century, state and national taxes levied to help pay for the Revolutionary War further strained municipal budgets. In order to control homelessness, vagrancy, and poverty, New England towns relied heavily on the "warning out" system inherited from English law. This was a process in which community leaders determined the legitimate hometown of unwanted persons or families in order to force them to leave, ostensibly to return to where they could receive care. The warning-out system alleviated the expense and responsibility for the general welfare of the poor in any community, and placed the burden on each town to look after its own.

But homelessness and poverty were problems as onerous in early America as they are today, and the system of warning out did little to address the fundamental causes of social disorder. Ultimately the warning-out system gave way to the establishment of general poorhouses and other charities. But the documents that recorded details about the lives of those who were warned out provide an extraordinary—and until now forgotten—history of people on the margin.

Unwelcome Americans puts a human face on poverty in early America by recovering the stories of forty New Englanders who were forced to leave various communities in Rhode Island. Rhode Island towns kept better and more complete warning-out records than other areas in New England, and because the official records include those who had migrated to Rhode Island from other places, these documents can be relied upon to describe the experiences of poor people across the region.

The stories are organized from birth to death, beginning with the lives of poor children and young adults, followed by families and single adults, and ending with the testimonies of the elderly and dying. Through meticulous research of historical records, Herndon has managed to recover voices that have not been heard for more than two hundred years, in the process painting a dramatically different picture of family and community life in early New England. These life stories tell us that those who were warned out were predominantly unmarried women with or without children, Native Americans, African Americans, and destitute families. Through this remarkable reconstruction, Herndon provides a corrective to the narratives of the privileged that have dominated the conversation in this crucial period of American history, and the lives she chronicles give greater depth and a richer dimension to our understanding of the growth of American social responsibility.

Ruth Wallis Herndon teaches history at the University of Toledo.