An Unsettled Conquest: The British Campaign Against the Peoples of Acadia 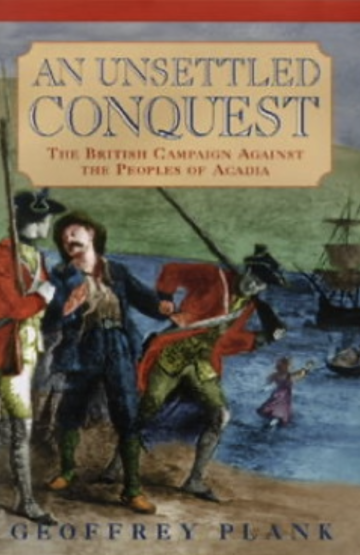 The former French colony of Acadia—permanently renamed Nova Scotia by the British when they began an ambitious occupation of the territory in 1710—witnessed one of the bitterest struggles in the British empire. Whereas in its other North American colonies Britain assumed it could garner the sympathies of fellow Europeans against the native peoples, in Nova Scotia nothing was further from the truth. The Mi'kmaq, the native local population, and the Acadians, descendants of the original French settlers, had coexisted for more than a hundred years prior to the British conquest, and their friendships, family ties, common Catholic religion, and commercial relationships proved resistant to British-enforced change. Unable to seize satisfactory political control over the region, despite numerous efforts at separating the Acadians and Mi'kmaq, the authorities took drastic steps in the 1750s, forcibly deporting the Acadians to other British colonies and systematically decimating the remaining native population.

The story of the removal of the Acadians, some of whose descendants are the Cajuns of Louisiana, and the subsequent oppression of the Mi'kmaq has never been completely told. In this first comprehensive history of the events leading up to the ultimate break-up of Nova Scotian society, Geoffrey Plank skillfully unravels the complex relationships of all of the groups involved, establishing the strong bonds between the Mi'kmaq and Acadians as well as the frustration of the British administrators that led to the Acadian removal, culminating in one of the most infamous events in North American history.

Geoffrey Plank is Associate Professor of History at the University of Cincinnati and author of Rebellion and Savagery: The Jacobite Rising of 1745 and the British Empire, also available from the University of Pennsylvania Press.