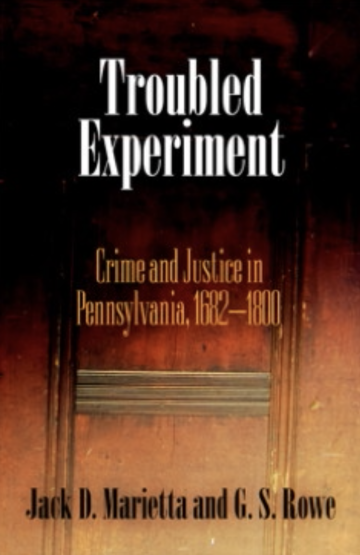 Eighteenth-century Pennsylvanians killed and abused each other at a pace that outstripped most of their English and American contemporaries and rivaled some of the worst crime rates in the following 200 years. They victimized their kin and neighbors as well as their enemies and rivals, and the powerful as well as the weak. And yet the land they populated was captioned the "Holy Experiment," renowned as the "best poor man's country on earth," and memorialized as the "Peaceable Kingdom." Troubled Experiment chronicles the extravagant crime in this unlikely place and explains how the disparity between reputation and reality arose.

This work attaches numbers and faces to the criminals and their victims and to the magistrates, judges, and others seeking to maintain a civil society in the face of violence and licentiousness. To provide such detail, the authors assembled an impressive array of archival materials, including all the extant public court records. No previous history has looked so closely at the volume and variety of crime in the Quaker province, the identity of the perpetrators of crime, their victims, and their prosecutors. The authors also examine the historical record of women, children, African Americans, and ethnic groups in their behavior as criminals, victims, and other actors in the criminal justice system.

Pennsylvanians exalted the freedom and toleration of their province, but Troubled Experiment explains that they confronted abuses of freedom that made them reexamine their tolerance and rethink their idealism. It lends a new perspective to the conventional characterization of Pennsylvania by adding the momentous dimensions of crime and punishment. The authors conclude by depicting Pennsylvania—vaunted as an enlightened, free society—as a community suffering from the problems of crime that plague America today.