A Town In-Between: Carlisle, Pennsylvania, and the Early Mid-Atlantic Interior 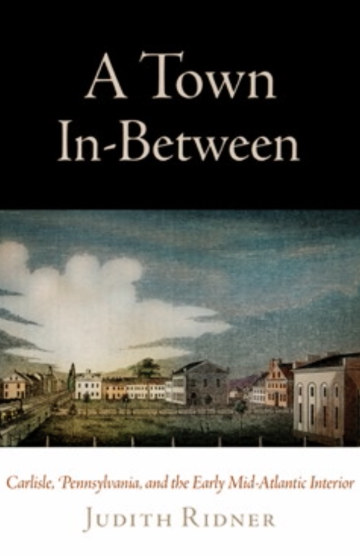 In A Town In-Between, Judith Ridner reveals the influential, turbulent past of a modest, quiet American community. Today Carlisle, Pennsylvania, nestled in the Susquehanna Valley, is far from the nation's political and financial centers. In the eighteenth century, however, Carlisle and its residents stood not only at a geographical crossroads but also at the fulcrum of early American controversies. Located between East Coast settlement and the western frontier, Carlisle quickly became a mid-Atlantic hub, serving as a migration gateway to the southern and western interiors, a commercial way station in the colonial fur trade, a military staging and supply ground during the Seven Years' War, American Revolution, and Whiskey Rebellion, and home to one of the first colleges in the United States, Dickinson.

A Town In-Between reconsiders the role early American towns and townspeople played in the development of the country's interior. Focusing on the lives of the ambitious group of Scots-Irish colonists who built Carlisle, Judith Ridner reasserts that the early American west was won by traders, merchants, artisans, and laborers—many of them Irish immigrants—and not just farmers. Founded by proprietor Thomas Penn, the rapidly growing town was the site of repeated uprisings, jailbreaks, and one of the most publicized Anti-Federalist riots during constitutional ratification. These conflicts had dramatic consequences for many Scots-Irish Presbyterian residents who found themselves a people in-between, mediating among the competing ethnoreligious, cultural, class, and political interests that separated them from their fellow Quaker and Anglican colonists of the Delaware Valley and their myriad Native American trading partners of the Ohio country.

In this thoroughly researched and highly readable study, Ridner argues that interior towns were not so much spearheads of a progressive and westward-moving Euro-American civilization, but volatile places situated in the middle of a culturally diverse, economically dynamic, and politically evolving early America.

Judith Ridner is Associate Professor of History at Muhlenberg College.