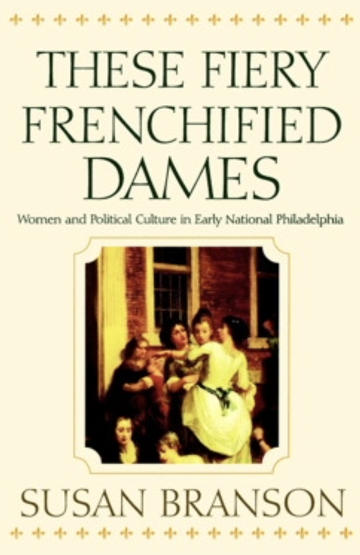 On July 4, 1796, a group of women gathered in York, Pennsylvania, to celebrate the twentieth anniversary of American independence. They drank tea and toasted the Revolution, the Constitution, and, finally, the rights of women. This event would have been unheard of thirty years before, but a popular political culture developed after the war in which women were actively involved, despite the fact that they could not vote or hold political office. This newfound atmosphere not only provided women with opportunities to celebrate national occasions outside the home but also enabled them to conceive of possessing specific rights in the young republic and to demand those rights in very public ways.

Susan Branson examines the avenues through which women's presence became central to the competition for control of the nation's political life and, despite attempts to quell the emerging power of women—typified by William Cobbett's derogatory label of politically active women as "these fiery Frenchified dames"—demonstrates that the social, political, and intellectual ideas regarding women in the post-Revolutionary era contributed to a more significant change in women's public lives than most historians have recognized.

As an early capital of the United States, the leading publishing center, and the largest and most cosmopolitan city in America during the eighteenth century, Philadelphia exerted a considerable influence on national politics, society, and culture. It was in Philadelphia that the Federalists and Democratic Republicans first struggled for America's political future, with women's involvement critical to the outcome of their heated partisan debates. Middle and upper-class women of Philadelphia were able to achieve a greater share in the culture and politics of the new nation through several key developments, including theaters and salons that were revitalized following the war, allowing women to intermingle and participate in political discussions, and the wider availability of national and international writings, particularly those that described women's involvement in the French Revolution—perhaps the most important and controversial historical event in the early development of American women's political consciousness.

Given these circumstances, Branson argues, American women were able to create new more active social and political roles for themselves that brought them out of the home and into the public sphere. Although excluded from the formal political arenas of voting and lawmaking, American women in the Age of Revolution nevertheless thought and acted politically and were able to make their presence and opinions known to the benefit of a young nation.

Susan Branson teaches history at the University of Texas at Dallas.