Taming Lust: Crimes Against Nature in the Early Republic 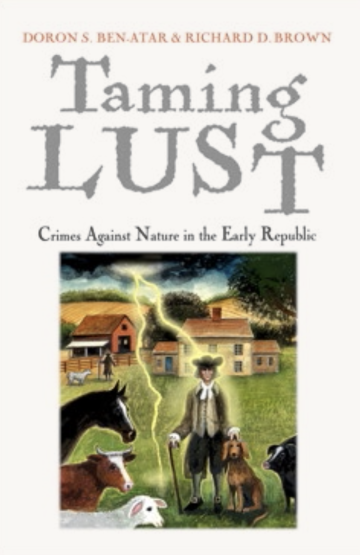 In 1796, as revolutionary fervor waned and the Age of Reason took hold, an eighty-five-year-old Massachusetts doctor was convicted of bestiality and sentenced to hang. Three years later and seventy miles away, an eighty-three-year-old Connecticut farmer was convicted of the same crime and sentenced to the same punishment. Prior to these criminal trials, neither Massachusetts nor Connecticut had executed anyone for bestiality in over a century. Though there are no overt connections between the two episodes, the similarities of their particulars are strange and striking. Historians Doron S. Ben-Atar and Richard D. Brown delve into the specifics to determine what larger social, political, or religious forces could have compelled New England courts to condemn two octogenarians for sexual misbehavior typically associated with much younger men.

The stories of John Farrell and Gideon Washburn are less about the two old men than New England officials who, riding the rough waves of modernity, returned to the severity of their ancestors. The political upheaval of the Revolution and the new republic created new kinds of cultural experience—both exciting and frightening—at a moment when New England farmers and village elites were contesting long-standing assumptions about divine creation and the social order. Ben-Atar and Brown offer a rare and vivid perspective on anxieties about sexual and social deviance in the early republic.

Doron S. Ben-Atar is Professor of History at Fordham University and author of Trade Secrets: Intellectual Piracy and the Origins of American Industrial Power.

Richard D. Brown is Board of Trustees Distinguished Professor of History Emeritus at the University of Connecticut and coauthor of The Hanging of Ephraim Wheeler: A Story of Rape, Incest, and Justice in Early America.