Seasons of Misery: Catastrophe and Colonial Settlement in Early America 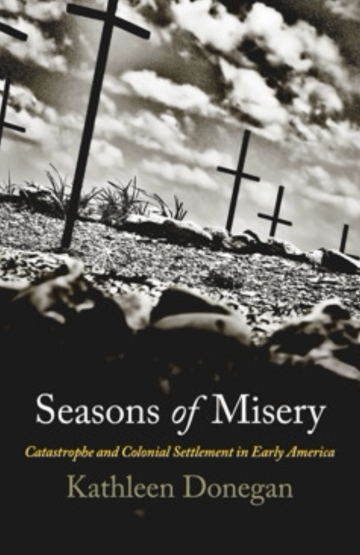 The stories we tell of American beginnings typically emphasize colonial triumph in the face of adversity. But the early years of English settlement in America were characterized by catastrophe: starvation, disease, extreme violence, ruinous ignorance, and serial abandonment. Seasons of Misery offers a provocative reexamination of the British colonies' chaotic and profoundly unstable beginnings, placing crisis—both experiential and existential—at the center of the story. At the outposts of a fledgling empire and disconnected from the social order of their home society, English settlers were both physically and psychologically estranged from their European identities. They could not control, or often even survive, the world they had intended to possess. According to Kathleen Donegan, it was in this cauldron of uncertainty that colonial identity was formed.

Studying the English settlements at Roanoke, Jamestown, Plymouth, and Barbados, Donegan argues that catastrophe marked the threshold between an old European identity and a new colonial identity, a state of instability in which only fragments of Englishness could survive amid the upheavals of the New World. This constant state of crisis also produced the first distinctively colonial literature as settlers attempted to process events that they could neither fully absorb nor understand. Bringing a critical eye to settlers' first-person accounts, Donegan applies a unique combination of narrative history and literary analysis to trace how settlers used a language of catastrophe to describe unprecedented circumstances, witness unrecognizable selves, and report unaccountable events. Seasons of Misery addresses both the stories that colonists told about themselves and the stories that we have constructed in hindsight about them. In doing so, it offers a new account of the meaning of settlement history and the creation of colonial identity.

Kathleen Donegan is Associate Professor of English and American Studies at the University of California, Berkeley.