Sealed with Blood: War, Sacrifice, and Memory in Revolutionary America 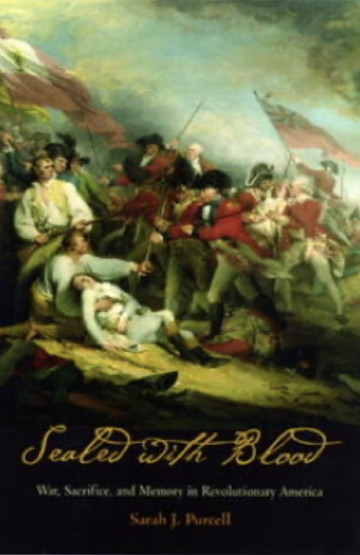 The first martyr to the cause of American liberty was Major General Joseph Warren, a well-known political orator, physician, and president of the Provincial Congress of Massachusetts. Shot in the face at close range at Bunker Hill, Warren was at once transformed into a national hero, with his story appearing throughout the colonies in newspapers, songs, pamphlets, sermons, and even theater productions. His death, though shockingly violent, was not unlike tens of thousands of others, but his sacrifice came to mean something much more significant to the American public.

Sealed with Blood reveals how public memories and commemorations of Revolutionary War heroes, such as those for Warren, helped Americans form a common bond and create a new national identity. Drawing from extensive research on civic celebrations and commemorative literature in the half-century that followed the War for Independence, Sarah Purcell shows how people invoked memories of their participation in and sacrifices during the war when they wanted to shore up their political interests, make money, argue for racial equality, solidify their class status, or protect their personal reputations. Images were also used, especially those of martyred officers, as examples of glory and sacrifice for the sake of American political principles.

By the midnineteenth century, African Americans, women, and especially poor white veterans used memories of the Revolutionary War to articulate their own, more inclusive visions of the American nation and to try to enhance their social and political status. Black slaves made explicit the connection between military service and claims to freedom from bondage. Between 1775 and 1825, the very idea of the American nation itself was also democratized, as the role of "the people" in keeping the sacred memory of the Revolutionary War broadened.