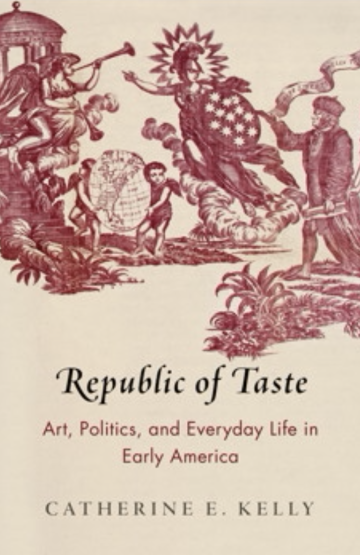 Since the early decades of the eighteenth century, European, and especially British, thinkers were preoccupied with questions of taste. Whether Americans believed that taste was innate—and therefore a marker of breeding and station—or acquired—and thus the product of application and study—all could appreciate that taste was grounded in, demonstrated through, and confirmed by reading, writing, and looking. It was widely believed that shared aesthetic sensibilities connected like-minded individuals and that shared affinities advanced the public good and held great promise for the American republic.

Exploring the intersection of the early republic's material, visual, literary, and political cultures, Catherine E. Kelly demonstrates how American thinkers acknowledged the similarities between aesthetics and politics in order to wrestle with questions about power and authority. Judgments about art, architecture, literature, poetry, and the theater became an arena for considering political issues ranging from government structures and legislative representation to qualifications for citizenship and the meaning of liberty itself. Additionally, if taste prompted political debate, it also encouraged affinity grounded in a shared national identity. In the years following independence, ordinary women and men reassured themselves that taste revealed larger truths about an individual's character and potential for republican citizenship.

Did an early national vocabulary of taste, then, with its privileged visuality, register beyond the debates over the ratification of the Constitution? Did it truly extend beyond political and politicized discourse to inform the imaginative structures and material forms of everyday life? Republic of Taste affirms that it did, although not in ways that anyone could have predicted at the conclusion of the American Revolution.

Catherine E. Kelly is Affiliated Professor of History at William and Mary and Editor of Books at the Omohundro Institute. She is author of In the New England Fashion: Reshaping Women's Lives in the Nineteenth Century.