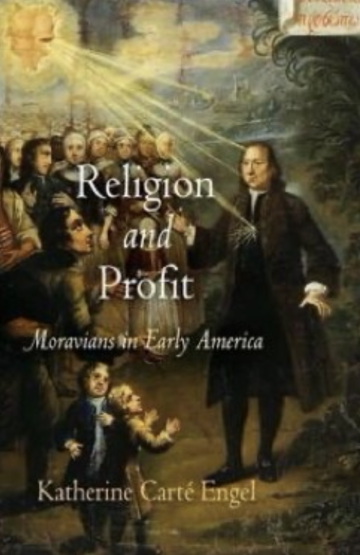 The Moravians, a Protestant sect founded in 1727 by Count Nikolaus Ludwig von Zinzendorf and based in Germany, were key players in the rise of international evangelicalism. In 1741, after planting communities on the frontiers of empires throughout the Atlantic world, they settled the communitarian enclave of Bethlehem, Pennsylvania, in order to spread the Gospel to thousands of nearby colonists and Native Americans. In time, the Moravians became some of early America's most successful missionaries.

Such vast projects demanded vast sums. Bethlehem's Moravians supported their work through financial savvy and an efficient brand of communalism. Moravian commercial networks, stretching from the Pennsylvania backcountry to Europe's financial capitals, also facilitated their efforts. Missionary outreach and commerce went hand in hand for this group, making it impossible to understand the Moravians' religious work without appreciating their sophisticated economic practices as well. Of course, making money in a manner that be fitted a Christian organization required considerable effort, but it was a balancing act that Moravian leaders embraced with vigor.

Religion and Profit traces the Moravians' evolving mission projects, their strategies for supporting those missions, and their gradual integration into the society of eighteenth-century North America. Katherine Carté Engel demonstrates the complex influence Moravian religious life had on the group's economic practices, and argues that the imperial conflict between Euro-Americans and Native Americans, and not the growth of capitalism or a process of secularization, ultimately reconfigured the circumstances of missionary work for the Moravians, altering their religious lives and economic practices.