From Privileges to Rights: Work and Politics in Colonial New York City 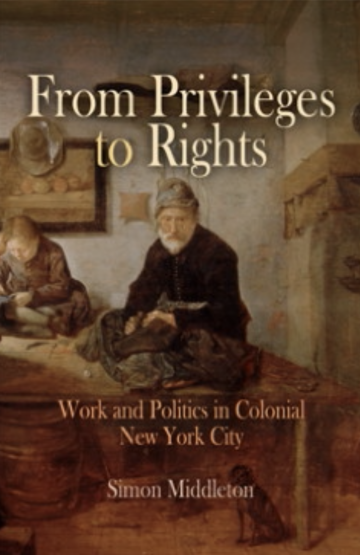 From Privileges to Rights connects the changing fortunes of tradesmen in early New York to the emergence of a conception of subjective rights that accompanied the transition to a republican and liberal order in eighteenth-century America.

Tradesmen in New Amsterdam occupied a distinct social position and, with varying levels of success, secured privileges such as a reasonable reward and the exclusion of strangers from their commerce. The struggle to maintain these privileges figured in the transition to English rule as well as Leisler's Rebellion. Using hitherto unexamined records from the New York City Mayor's Court, Simon Middleton also demonstrates that, rather than merely mastering skilled crafts in workshops, artisans participated in whatever enterprises and markets promised profits with a minimum of risk. Bakers, butchers, and carpenters competed in a bustling urban economy knit together by credit that connected their fortunes to the Atlantic trade.

In the early eighteenth century, political and legal changes diminished earlier social distinctions and the grounds for privileges, while an increasing reliance on slave labor stigmatized menial toil. When an economic and a constitutional crisis prompted the importation of radical English republican ideas, artisans were recast artisans as virtuous male property owners whose consent was essential for legitimate government. In this way, an artisanal subject emerged that provided a constituency for the development of a populist and egalitarian republican political culture in New York City.