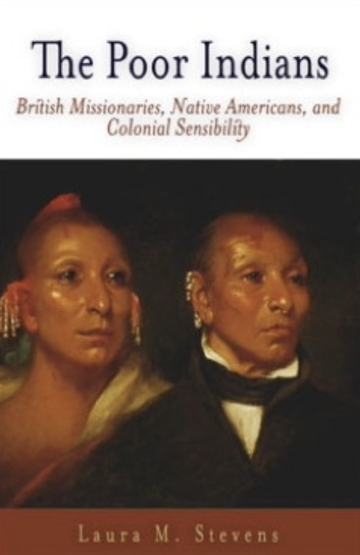 Between the English Civil War of 1642 and the American Revolution, countless British missionaries announced their intention to "spread the gospel" among the native North American population. Despite the scope of their endeavors, they converted only a handful of American Indians to Christianity. Their attempts to secure moral and financial support at home proved much more successful.

In The Poor Indians, Laura Stevens delves deeply into the language and ideology British missionaries used to gain support, and she examines their wider cultural significance. Invoking pity and compassion for "the poor Indian"—a purely fictional construct—British missionaries used the Black Legend of cruelties perpetrated by Spanish conquistadors to contrast their own projects with those of Catholic missionaries, whose methods were often brutal and deceitful. They also tapped into a remarkably effective means of swaying British Christians by connecting the latter's feelings of religious superiority with moral obligation. Describing mission work through metaphors of commerce, missionaries asked their readers in England to invest, financially and emotionally, in the cultivation of Indian souls. As they saved Indians from afar, supporters renewed their own faith, strengthened the empire against the corrosive effects of paganism, and invested in British Christianity with philanthropic fervor.

The Poor Indians thus uncovers the importance of religious feeling and commercial metaphor in strengthening imperial identity and colonial ties, and it shows how missionary writings helped fashion British subjects who were self-consciously transatlantic and imperial because they were religious, sentimental, and actively charitable.

Laura M. Stevens teaches English at the University of Tulsa.