Political Gastronomy: Food and Authority in the English Atlantic World 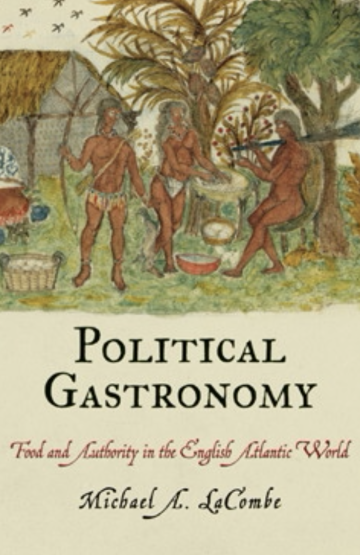 By Michael A. Lacombe

"The table constitutes a kind of tie between the bargainer and the bargained-with, and makes the diners more willing to receive certain impressions, to submit to certain influences: from this is born political gastronomy. Meals have become a means of governing, and the fate of whole peoples is decided at a banquet."—Jean Anthèlme Brillat-Savarin, The Physiology of Taste, or, Meditations on Transcendental Gastronomy

The first Thanksgiving at Plymouth in 1621 was a powerfully symbolic event and not merely the pageant of abundance that we still reenact today. In these early encounters between Indians and English in North America, food was also symbolic of power: the venison brought to Plymouth by the Indians, for example, was resonant of both masculine skill with weapons and the status of the men who offered it. These meanings were clearly understood by Plymouth's leaders, however weak they appeared in comparison.

Political Gastronomy examines the meaning of food in its many facets: planting, gathering, hunting, cooking, shared meals, and the daily labor that sustained ordinary households. Public occasions such as the first Thanksgiving could be used to reinforce claims to status and precedence, but even seemingly trivial gestures could dramatize the tense negotiations of status and authority: an offer of roast squirrel or a spoonful of beer, a guest's refusal to accept his place at the table, the presence and type of utensils, whether hands should be washed or napkins used. Historian Michael A. LaCombe places Anglo-Indian encounters at the center of his study, and his wide-ranging research shows that despite their many differences in language, culture, and beliefs, English settlers and American Indians were able to communicate reciprocally in the symbolic language of food.