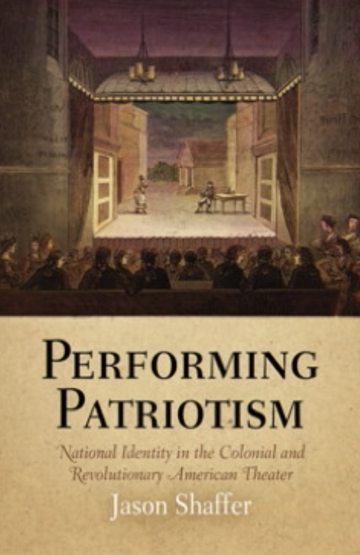 During the eighteenth century, North American colonists began to display an increasing appetite for professional and amateur theatrical performances and a familiarity with the British dramatic canon ranging from the tragedies of Shakespeare, Addison, and Rowe to the comedies of Farquhar, Steele, and Gay. This interest sparked demand for both the latest hits of the London stage and a body of plays centered on patriotic (and often partisan) British themes. As relations between the crown and the colonies soured, the texts of these plays evolved into a common frame of reference for political arguments over colonial policy. Making the transition to print, these arguments deployed dramatic texts and theatrical metaphors for political advantage. Eventually, with the production of American propaganda plays during the Revolution, colonists began to develop a patriotic drama of their own, albeit one that still stressed the "British" character of American patriotism.

Performing Patriotism examines the role of theatrical performance and printed drama in the development of early American political culture. Building on the eighteenth-century commonplace that the theater could be a school for public virtue, Jason Shaffer illustrates the connections between the popularity of theatrical performances in eighteenth-century British North America and the British and American national identities that colonial and Revolutionary Americans espoused. The result is a wide-ranging survey of eighteenth-century American theater history and print culture.

Jason Shaffer is Associate Professor of English at the United States Naval Academy.