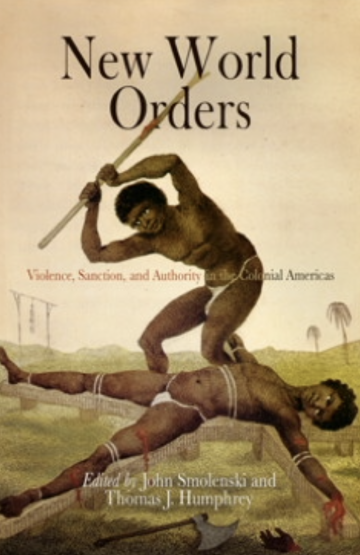 As the geographic boundaries of early American history have expanded, so too have historians' attempts to explore the comparative dimensions of this history. At the same time, historians have struggled to find a conceptual framework flexible enough to incorporate the sweeping narratives of imperial history and the hidden narratives of social history into a broader, synthetic whole. No such paradigm that captures the two perspectives has yet emerged.

New World Orders addresses these broad conceptual issues by reexamining the relationships among violence, sanction, and authority in the early modern Americas. More specifically, the essays in this volume explore the wide variety of legal and extralegal means—from state-sponsored executions to unsanctioned crowd actions—by which social order was maintained, with a particular emphasis on how extralegal sanctions were defined and used; how such sanctions related to legal forms of maintaining order; and how these patterns of sanction, embedded within other forms of colonialism and culture, created cultural, legal, social, or imperial spaces in the early Americas.

With essays written by senior and junior scholars on the British, Spanish, Dutch, and French colonies, New World Orderspresents one of the most comprehensive looks at the sweep of colonization in the Atlantic world. By juxtaposing case studies from Brazil, Venezuela, New York, California, Saint Domingue, and Louisiana with treatments of broader trends in Anglo-America or Spanish America more generally, the volume demonstrates the need to examine the questions of violence, sanction, and authority in hemispheric perspective.

John Smolenski teaches history at the University of California, Davis. Thomas J. Humphrey is Associate Professor of History at Cleveland State University and author of Land and Liberty: Hudson Valley Riots in the Age of Revolution.