A Nation of Women: Gender and Colonial Encounters Among the Delaware Indians 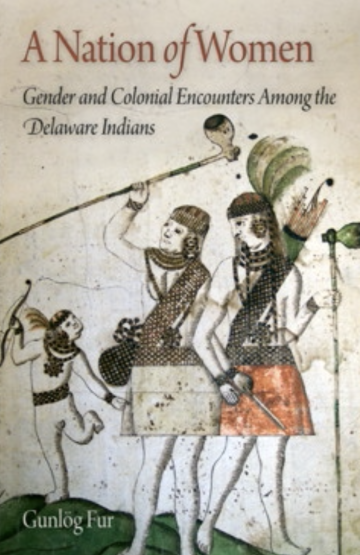 A Nation of Women chronicles changing ideas of gender and identity among the Delaware Indians from the mid-seventeenth through the eighteenth century, as they encountered various waves of migrating peoples in their homelands along the eastern coast of North America.

In Delaware society at the beginning of this period, to be a woman meant to engage in the activities performed by women, including diplomacy, rather than to be defined by biological sex. Among the Delaware, being a "woman" was therefore a self-identification, employed by both women and men, that reflected the complementary roles of both sexes within Delaware society. For these reasons, the Delaware were known among Europeans and other Native American groups as "a nation of women."

Decades of interaction with these other cultures gradually eroded the positive connotations of being a nation of women as well as the importance of actual women in Delaware society. In Anglo-Indian politics, being depicted as a woman suggested weakness and evil. Exposed to such thinking, Delaware men struggled successfully to assume the formal speaking roles and political authority that women once held. To salvage some sense of gender complementarity in Delaware society, men and women redrew the lines of their duties more rigidly. As the era came to a close, even as some Delaware engaged in a renewal of Delaware identity as a masculine nation, others rejected involvement in Christian networks that threatened to disturb the already precarious gender balance in their social relations.

Drawing on all available European accounts, including those in Swedish, German, and English, Fur establishes the centrality of gender in Delaware life and, in doing so, argues for a new understanding of how different notions of gender influenced all interactions in colonial North America.

Gunlög Fur is Professor of History at Växjö University, Sweden.