In My Power: Letter Writing and Communications in Early America 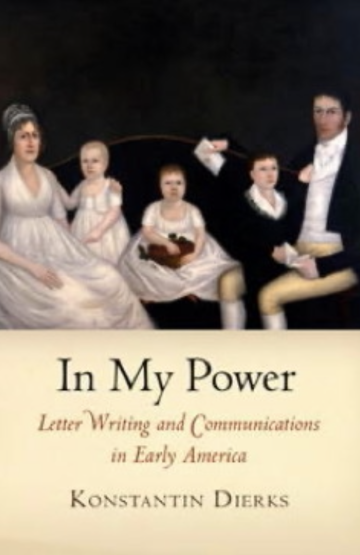 In My Power tells the story of letter writing and communications in the creation of the British Empire and the formation of the United States. In an era of bewildering geographical mobility, economic metamorphosis, and political upheaval, the proliferation of letter writing and the development of a communications infrastructure enabled middle-class Britons and Americans to rise to advantage in the British Atlantic world.

Everyday letter writing demonstrated that the blessings of success in the early modern world could come less from the control of overt political power than from the cultivation of social skills that assured the middle class of their technical credentials, moral deserving, and social innocence. In writing letters, the middle class not only took effective action in a turbulent world but also defined what they believed themselves to be able to do in that world. Because this ideology of agency was extended to women and the youngest of children in the eighteenth century, it could be presented as universalized even as it was withheld from Native Americans and enslaved blacks.

Whatever the explicit purposes behind letter writing may have been—educational improvement, family connection, business enterprise—the effect was to render the full terms of social division invisible both to those who accumulated power and to those who did not. The uncontested power that came from letter writing was, Konstantin Dierks provocatively argues, as important as racist violence to the rise of the white middle class in the British Atlantic world.