Many Identities, One Nation: The Revolution and Its Legacy in the Mid-Atlantic 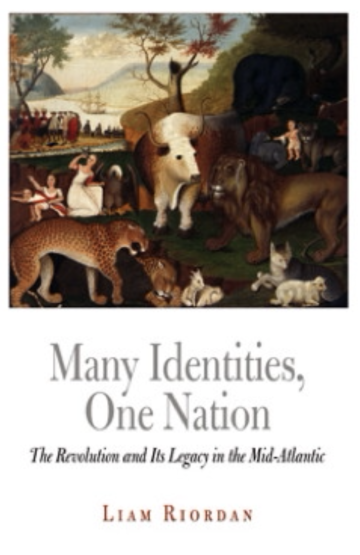 The richly diverse population of the mid-Atlantic region distinguished it from the homogeneity of Puritan New England and the stark differences of the plantation South that still dominate our understanding of early America. In Many Identities, One Nation, Liam Riordan explores how the American Revolution politicized religious, racial, and ethnic identities among the diverse inhabitants of Pennsylvania, Delaware, and New Jersey. Attending to individual experiences through a close comparative analysis, Riordan explains the transformation from British subjects to U.S. citizens in a region that included Quakers, African Americans, and Pennsylvania Germans.

In the face of a gradually emerging sense of nationalism, varied forms of personal and group identities took on heightened public significance in the Revolutionary Delaware Valley. While Quakers in Burlington, New Jersey, remained suspect after the war because of their pacifism, newly freed slaves in New Castle, Delaware, demanded full inclusion, and bilingual Pennsylvania Germans in Easton, Pennsylvania, successfully struggled to create a central place for themselves in the new nation. By placing the public contest over the proper expression of group distinctiveness in the context of local life, Riordan offers a new understanding of how cultural identity structured the early Jacksonian society of the 1820s as a culmination of the American Revolution in this region.

This compelling story brings to life the popular culture of the Revolutionary Delaware Valley through analysis of wide-ranging evidence, from architecture, folk art, clothing, and music to personal papers, newspapers, and local church, tax, and census records. The study's multilayered local perspective allows us to see how the Revolutionary upheaval of the colonial status quo penetrated everyday life and stimulated new understandings of the importance of cultural diversity in the Revolutionary nation.

Liam Riordan is Associate Professor of History at the University of Maine.