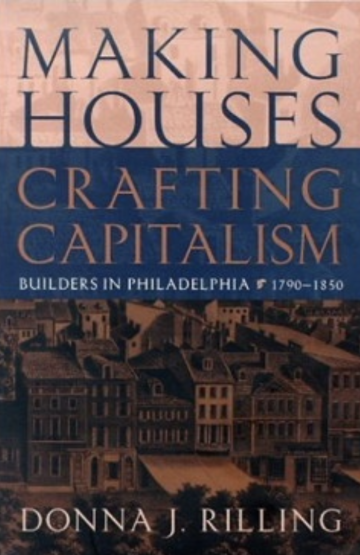 In the decades after the American Revolution, as Philadelphia became a center of political and economic power, the city experienced extraordinary population growth, increasing from 60,000 to 400,000 inhabitants between 1790 and 1850. By tracing the business strategies of several hundred housebuilders during this period—a medley of traditional craft workers, emerging entrepreneurs, and hustling speculators—Making Houses, Crafting Capitalism uncovers the complex process by which thousands of row houses were constructed and sold, and shows how craftsmen were at the center of this dramatic physical and economic expansion.

Simultaneously assuming the roles of craftsmen, entrepreneurs, supervisors, and demiarchitects, the master builders of Philadelphia survived much longer as independent business owners and were more influential than their peers in other cities of Jacksonian America. Facing an ever-changing economic and urban landscape, and encouraged by wealthy Philadelphia families to undertake the financial risks associated with construction, small capitalists exercised great flexibility in their business practices.

Early-nineteenth century Philadelphia house artisans also formulated an important new strategy: they acquired credit and built on speculation. Such practices drew them deeply into a competitive and volatile economy, and artisans in the Philadelphia construction trades responded as spirited, innovative entrepreneurs who plunged wholeheartedly into the dangers and rewards of capitalism. When credit flowed, they competed for contracts to build ten, twenty, even forty houses at a time. When business slowed during the economic depressions of the period, they ferreted out small jobs, repairs, renovations, and custom work.

In Making Houses, Crafting Capitalism, Donna J. Rilling follows the work of entrepreneurial builders, from the procurement of bricks and mortar to the eventual marketing and sale of a finished house. By tracing these activities, Rilling demonstrates the diverse ways capital markets, worksites, raw materials, and the real estate business changed over six decades. She opens the world of artisans to reveal their creative impact on the Philadelphia economy and the ways they exploited the shifting organization of work and capital to secure their financial independence. The aggressive craftsmen profiled in Making Houses, Crafting Capitalism will enrich and complicate how historians think about small producers and their role in the nineteenth-century economy.