Liberty on the Waterfront: American Maritime Culture in the Age of Revolution 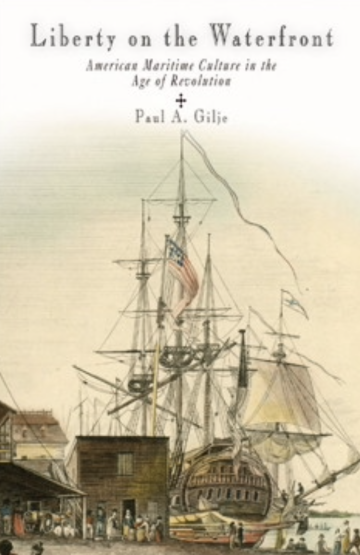 By Paul A. Gilje

Through careful research and colorful accounts, historian Paul A. Gilje discovers what liberty meant to an important group of common men in American society, those who lived and worked on the waterfront and aboard ships. In the process he reveals that the idealized vision of liberty associated with the Founding Fathers had a much more immediate and complex meaning than previously thought.

In Liberty on the Waterfront: American Maritime Culture in the Age of Revolution, life aboard warships, merchantmen, and whalers, as well as the interactions of mariners and others on shore, is recreated in absorbing detail. Describing the important contributions of sailors to the resistance movement against Great Britain and their experiences during the Revolutionary War, Gilje demonstrates that, while sailors recognized the ideals of the Revolution, their idea of liberty was far more individual in nature—often expressed through hard drinking and womanizing or joining a ship of their choice.

Gilje continues the story into the post-Revolutionary world highlighted by the Quasi War with France, the confrontation with the Barbary Pirates, and the War of 1812.

Paul A. Gilje is Professor of History at the University of Oklahoma. He is the author of Rioting in America and The Road to Mobocracy: Popular Disorder in New York City, 1763-1834.