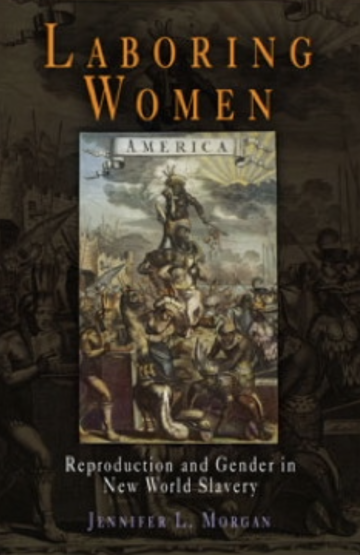 When black women were brought from Africa to the New World as slave laborers, their value was determined by their ability to work as well as their potential to bear children, who by law would become the enslaved property of the mother's master. In Laboring Women: Reproduction and Gender in New World Slavery, Jennifer L. Morgan examines for the first time how African women's labor in both senses became intertwined in the English colonies. Beginning with the ideological foundations of racial slavery in early modern Europe, Laboring Women traverses the Atlantic, exploring the social and cultural lives of women in West Africa, slaveowners' expectations for reproductive labor, and women's lives as workers and mothers under colonial slavery.

Challenging conventional wisdom, Morgan reveals how expectations regarding gender and reproduction were central to racial ideologies, the organization of slave labor, and the nature of slave community and resistance. Taking into consideration the heritage of Africans prior to enslavement and the cultural logic of values and practices recreated under the duress of slavery, she examines how women's gender identity was defined by their shared experiences as agricultural laborers and mothers, and shows how, given these distinctions, their situation differed considerably from that of enslaved men. Telling her story through the arc of African women's actual lives—from West Africa, to the experience of the Middle Passage, to life on the plantations—she offers a thoughtful look at the ways women's reproductive experience shaped their roles in communities and helped them resist some of the more egregious effects of slave life.

Presenting a highly original, theoretically grounded view of reproduction and labor as the twin pillars of female exploitation in slavery, Laboring Women is a distinctive contribution to the literature of slavery and the history of women.