Jesus Is Female: Moravians and Radical Religion in Early America 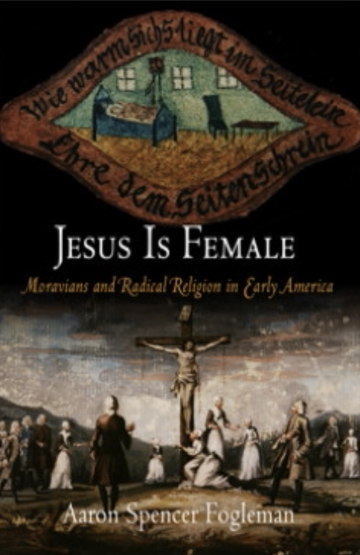 In the middle of the Great Awakening, a group of religious radicals called Moravians came to North America from Germany to pursue ambitious missionary goals. How did the Protestant establishment react to the efforts of this group, which allowed women to preach, practiced alternative forms of marriage, sex, and family life, and believed Jesus could be female? Aaron Spencer Fogleman explains how these views, as well as the Moravians' missionary successes, provoked a vigorous response by Protestant authorities on both sides of the Atlantic.

Based on documents in German, Dutch, and English from the Old World and the New, Jesus Is Female chronicles the religious violence that erupted in many German and Swedish communities in colonial America as colonists fought over whether to accept the Moravians, and suggests that gender issues were at the heart of the raging conflict. Colonists fought over the feminine, ecumenical religious order offered by the Moravians and the patriarchal, confessional order offered by Lutheran and Reformed clergy. This episode reveals both the potential and the limits of radical religion in early America. Though religious nonconformity persisted despite the repression of the Moravians, and though America remained a refuge for such groups, those who challenged the cultural order in their religious beliefs and practices would not escape persecution.

Jesus Is Female traces the role of gender in eighteenth-century religious conflict back to the European Reformation and the beginnings of Protestantism. This transatlantic approach heightens our understanding of American developments and allows for a better understanding of what occurred when religious freedom in a colonial setting led to radical challenges to tradition and social order.

Aaron Spencer Fogleman is Professor of History at Northern Illinois University. He is the author of Hopeful Journeys: German Immigration, Settlement, and Political Culture in Colonial America, 1717-1775, also published by the University of Pennsylvania Press.