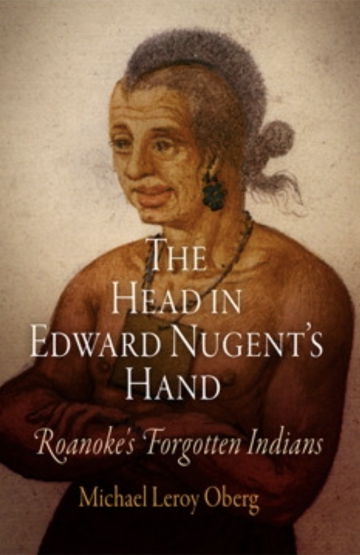 Roanoke is part of the lore of early America, the colony that disappeared. Many Americans know of Sir Walter Ralegh's ill-fated expedition, but few know about the Algonquian peoples who were the island's inhabitants. The Head in Edward Nugent's Hand examines Ralegh's plan to create an English empire in the New World but also the attempts of native peoples to make sense of the newcomers who threatened to transform their world in frightening ways.

Beginning his narrative well before Ralegh's arrival, Michael Leroy Oberg looks closely at the Indians who first encountered the colonists. The English intruded into a well-established Native American world at Roanoke, led by Wingina, the weroance, or leader, of the Algonquian peoples on the island. Oberg also pays close attention to how the weroance and his people understood the arrival of the English: we watch as Wingina's brother first boards Ralegh's ship, and we listen in as Wingina receives the report of its arrival. Driving the narrative is the leader's ultimate fate: Wingina is decapitated by one of Ralegh's men in the summer of 1586.

When the story of Roanoke is recast in an effort to understand how and why an Algonquian weroance was murdered, and with what consequences, we arrive at a more nuanced and sophisticated understanding of what happened during this, the dawn of English settlement in America.

Michael Leroy Oberg is SUNY Distinguished Professor at the State University of New York at Geneseo and the author of Professional Indian: The American Odyssey of Eleazer Williams, also available from the University of Pennsylvania Press.