Frontier Country: The Politics of War in Early Pennsylvania 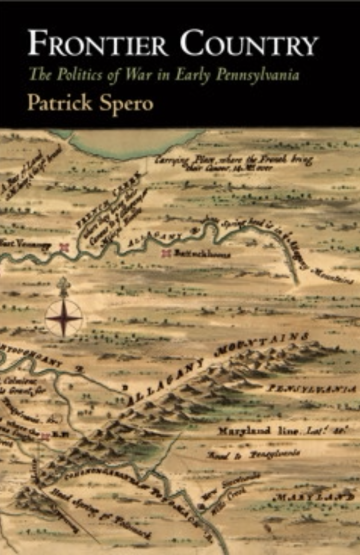 In Frontier Country, Patrick Spero addresses one of the most important and controversial subjects in American history: the frontier. Countering the modern conception of the American frontier as an area of expansion, Spero employs the eighteenth-century meaning of the term to show how colonists understood it as a vulnerable, militarized boundary. The Pennsylvania frontier, Spero argues, was constituted through conflicts not only between colonists and Native Americans but also among neighboring British colonies. These violent encounters created what Spero describes as a distinctive "frontier society" on the eve of the American Revolution that transformed the once-peaceful colony of Pennsylvania into a "frontier country."

Spero narrates Pennsylvania's story through a sequence of formative but until now largely overlooked confrontations: an eight-year-long border war between Maryland and Pennsylvania in the 1730s; the Seven Years' War and conflicts with Native Americans in the 1750s; a series of frontier rebellions in the 1760s that rocked the colony and its governing elite; and wars Pennsylvania fought with Virginia and Connecticut in the 1770s over its western and northern borders. Deploying innovative data-mining and GIS-mapping techniques to produce a series of customized maps, he illustrates the growth and shifting locations of frontiers over time. Synthesizing the tensions between high and low politics and between eastern and western regions in Pennsylvania before the Revolution, Spero recasts the importance of frontiers to the development of colonial America and the origins of American Independence.

Patrick Spero is the Librarian and Director of the American Philosophical Society Library. He is coeditor of The American Revolution Reborn, also available from the University of Pennsylvania Press.