The First Prejudice: Religious Tolerance and Intolerance in Early America 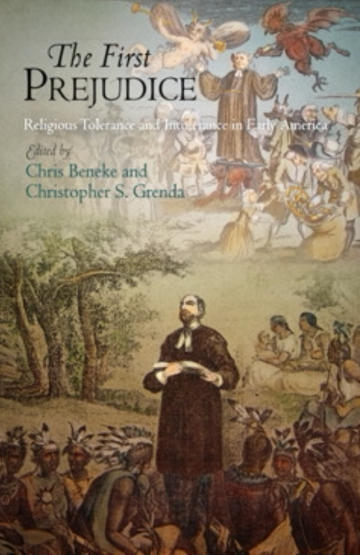 Edited by Chris Beneke and Christopher S. Grenda
In many ways, religion was the United States' first prejudice—both an early source of bigotry and the object of the first sustained efforts to limit its effects. Spanning more than two centuries across colonial British America and the United States, The First Prejudice offers a groundbreaking exploration of the early history of persecution and toleration. The twelve essays in this volume were composed by leading historians with an eye to the larger significance of religious tolerance and intolerance. Individual chapters examine the prosecution of religious crimes, the biblical sources of tolerance and intolerance, the British imperial context of toleration, the bounds of Native American spiritual independence, the nuances of anti-Semitism and anti-Catholicism, the resilience of African American faiths, and the challenges confronted by skeptics and freethinkers.

The First Prejudice presents a revealing portrait of the rhetoric, regulations, and customs that shaped the relationships between people of different faiths in seventeenth- and eighteenth-century America. It relates changes in law and language to the lived experience of religious conflict and religious cooperation, highlighting the crucial ways in which they molded U.S. culture and politics. By incorporating a broad range of groups and religious differences in its accounts of tolerance and intolerance, The First Prejudice opens a significant new vista on the understanding of America's long experience with diversity.

Chris Beneke is Associate Professor of History and Director of the Valente Center for Arts and Sciences at Bentley University and author of Beyond Toleration: The Religious Origins of American Pluralism.

Christopher S. Grenda is Associate Professor of History at Bronx Community College of the City University of New York.