First Lady of Letters: Judith Sargent Murray and the Struggle for Female Independence 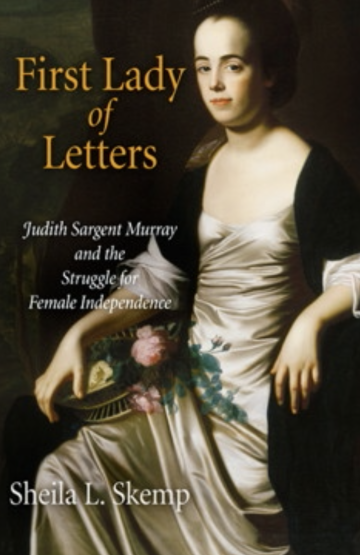 Judith Sargent Murray (1751-1820), poet, essayist, playwright, and one of the most thoroughgoing advocates of women's rights in early America, was as well known in her own day as Abigail Adams or Martha Washington. Her name, though, has virtually disappeared from the public consciousness. Thanks to the recent discovery of Murray's papers—including some 2,500 personal letters—historian Sheila L. Skemp has documented the compelling story of this talented and most unusual eighteenth-century woman.

Born in Gloucester, Massachussetts, Murray moved to Boston in 1793 with her second husband, Universalist minister John Murray. There she became part of the city's literary scene. Two of her plays were performed at Federal Street Theater, making her the first American woman to have a play produced in Boston. There as well she wrote and published her magnum opus, The Gleaner, a three-volume "miscellany" that included poems, essays, and the novel-like story "Margaretta." After 1800, Murray's output diminished and her hopes for literary renown faded. Suffering from the backlash against women's rights that had begun to permeate American society, struggling with economic difficulties, and concerned about providing the best possible education for her daughter, she devoted little time to writing. But while her efforts diminished, they never ceased.

Murray was determined to transcend the boundaries that limited women of her era and worked tirelessly to have women granted the same right to the "pursuit of happiness" immortalized in the Declaration of Independence. She questioned the meaning of gender itself, emphasizing the human qualities men and women shared, arguing that the apparent distinctions were the consequence of nurture, not nature. Although she was disappointed in the results of her efforts, Murray nevertheless left a rich intellectual and literary legacy, in which she challenged the new nation to fulfill its promise of equality to all citizens.

Sheila L. Skemp is Clare Leslie Marquette Professor of History at the University of Mississippi.