First City: Philadelphia and the Forging of Historical Memory 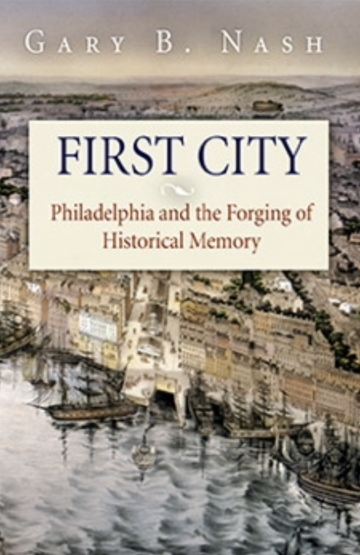 With its rich foundation stories, Philadelphia may be the most important city in America's collective memory. By the middle of the eighteenth century William Penn's "greene countrie town" was, after London, the largest city in the British Empire. The two most important documents in the history of the United States, the Declaration of Independence and the Constitution, were drafted and signed in Philadelphia. The city served off and on as the official capital of the young country until 1800, and was also the site of the first American university, hospital, medical college, bank, paper mill, zoo, sugar refinery, public school, and government mint.

In First City, acclaimed historian Gary B. Nash examines the complex process of memory making in this most historic of American cities. Though history is necessarily written from the evidence we have of the past, as Nash shows, rarely is that evidence preserved without intent, nor is it equally representative. Full of surprising anecdotes, First City reveals how Philadelphians—from members of elite cultural institutions, such as historical societies and museums, to relatively anonymous groups, such as women, racial and religious minorities, and laboring people—have participated in the very partisan activity of transmitting historical memory from one generation to the next.

Gary B. Nash is Professor of History at the University of California, Los Angeles, and author of many books, including The Unknown American Revolution: The Unruly Birth of Democracy and the Struggle to Create America and History on Trial: Culture Wars and the Teaching of the Past.