Embodied History: The Lives of the Poor in Early Philadelphia 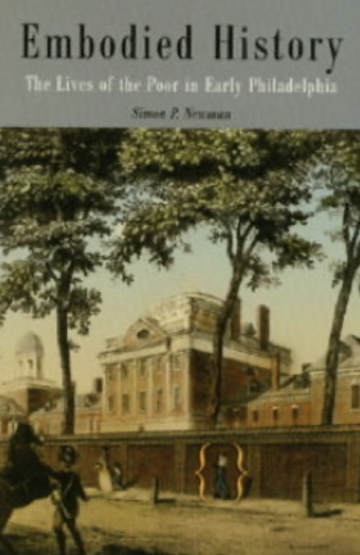 Offering a new view into the lives and experiences of plebeian men and women, and a provocative exploration of the history of the body itself, Embodied History approaches the bodies of the poor in early national Philadelphia as texts to be read and interpreted. Through a close examination of accounts of the bodies that appeared in runaway advertisements and in seafaring, almshouse, prison, hospital, and burial records, Simon P. Newman uses physical details to paint an entirely different portrait of the material circumstances of the poor, examining the ways they became categorized in the emerging social hierarchy, and how they sought to resist such categorization.

The Philadelphians examined in Embodied History were members of the lower sort, a social category that emerged in the early modern period from the belief in a society composed of natural orders and ranks. The population of the urban poor grew rapidly after the American Revolution, and middling and elite citizens were frightened by these poor bodies, from the tattooed professional sailor, to the African American runaway with a highly personalized hairstyle and distinctive mannerisms and gestures, to the vigorous and lively Irish prostitute who refused to be cowed by the condemnation of others, to the hardworking laboring family whose weakened and diseased children played and sang in the alleys. In a new republic premised on liberty and equality, the rapidly increasing ranks of unruly bodies threatened to overwhelm traditional notions of deference, hierarchy, and order.

Affluent Philadelphians responded by employing runaway advertisements, the almshouse, the prison, and to a lesser degree the hospital to incarcerate, control, and correct poor bodies and transform them into well-dressed, hardworking, deferential members of society. Embodied History is a compelling and accessible exploration of how poverty was etched and how power and discipline were enacted upon the bodies of the poor, as well as how the poor attempted to transcend such discipline through assertions of bodily agency and liberty.

Simon P. Newman is Sir Denis Brogan Professor of American Studies, University of Glasgow, and author of Parades and the Politics of the Street: Festive Culture in the Early American Republic, also available from the University of Pennsylvania Press.