Doomsayers: Anglo-American Prophecy in the Age of Revolution 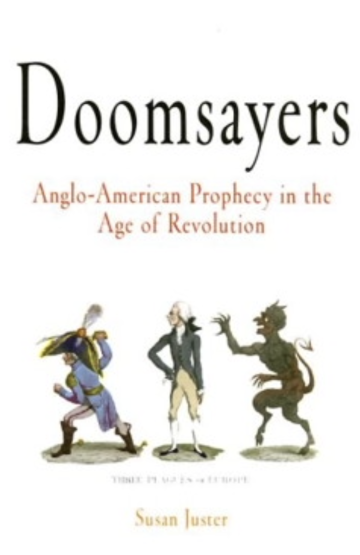 The age of revolution, in which kings were dethroned, radical ideals of human equality embraced, and new constitutions written, was also the age of prophecy. Neither an archaic remnant nor a novel practice, prophecy in the eighteenth century was rooted both in the primitive worldview of the Old Testament and in the vibrant intellectual environment of the philosophers and their political allies, the republicans. In Doomsayers: Anglo-American Prophecy in the Age of Revolution, Susan Juster examines the culture of prophecy in Great Britain and the United States from 1765 to 1815 side by side with the intellectual and political transformations that gave the period its historical distinction as the era of enlightened rationalism and democratic revolution.

Although sometimes viewed as madmen or fools, prophets of the 1790s and early 1800s were very much products of a liberal commercial society, even while they registered their disapproval of the values and practices of that society and fought a determined campaign to return Protestant Anglo-America to its biblical moorings. They enjoyed greater visibility than their counterparts of earlier eras, thanks to the creation of a vigorous new public sphere of coffeehouses, newspapers, corresponding societies, voluntary associations, and penny pamphlets. Prophecy was no longer just the art of applying biblical passages to contemporary events; it was now the business of selling both terror and reassurance to eager buyers. Tracking the careers of several hundred men and women in Britain and North America, most of ordinary background, who preached a message of primitive justice that jarred against the cosmopolitan sensibilities of their audiences, Doomsayers explores how prophetic claims were formulated, challenged, tested, advanced, and abandoned. The stories of these doomsayers, whose colorful careers entertained and annoyed readers across the political spectrum, challenge the notion that religious faith and the Enlightenment represented fundamentally alien ways of living in and with the world.

From the debates over religious enthusiasm staged by churchmen and the literati to the earnest offerings of ordinary men and women to speak to and for God, Doomsayers shows that the contest between prophets and their critics for the allegiance of the Anglo-American reading public was part of a broader recalibration of the norms and values of civic discourse in the age of revolution.

Susan Juster is the Rhys Isaac Collegiate Professor of History at the University of Michigan and a John Simon Guggenheim Memorial Foundation Fellow. She is coeditor of Empires of God: Religious Encounters in the Early Modern Atlantic, also available from the University of Pennsylvania Press.