Discerning Characters: The Culture of Appearance in Early America 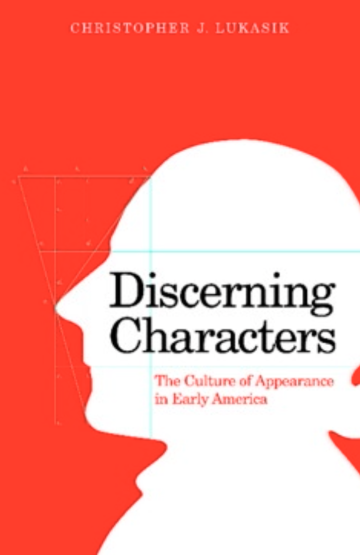 In this path-breaking study of the intersections between visual and literary culture, Christopher J. Lukasik explores how early Americans grappled with the relationship between appearance and social distinction in the decades between the American Revolution and the Civil War.

Through a wide range of evidence, including canonical and obscure novels, newspapers, periodicals, scientific and medical treatises, and plays as well as conduct manuals, portraits, silhouettes, and engravings, Discerning Characterscharts the transition from the eighteenth century's emphasis on performance and manners to the search for a more reliable form of corporeal legibility in the wake of the Revolution. The emergence of physiognomy, which sought to understand a person's character based on apparently unchanging facial features, facilitated a larger shift in perception about the meanings of physical appearance and its relationship to social distinction.

The ensuing struggle between the face as a pliable medium of cultural performance and as rigid evidence of social standing, Lukasik argues, was at the center of the post-Revolutionary novel, which imagined physiognomic distinction as providing stability during a time of cultural division and political turmoil. As Lukasik shows, this tension between a model of character grounded in the fluid performances of the self and one grounded in the permanent features of the face would continue to shape not only the representation of social distinction within the novel but, more broadly, the practices of literary production and reception in nineteenth-century America across a wide range of media.

The result is a new interdisciplinary interpretation of the rise of the novel in America that reconsiders the political and social aims of the genre during the fifty years following the Revolution. In so doing, Discerning Characterspowerfully rethinks how we have read—and continue to read—both novels and each other.