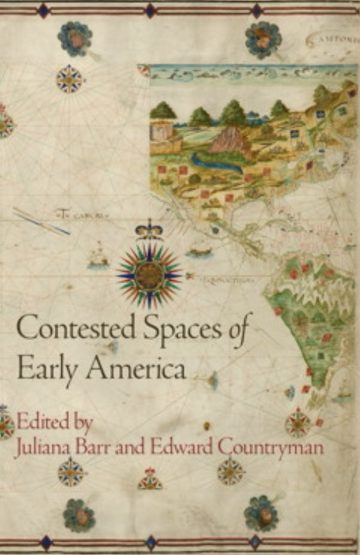 Colonial America stretched from Quebec to Buenos Aires and from the Atlantic littoral to the Pacific coast. Although European settlers laid claim to territories they called New Spain, New England, and New France, the reality of living in those spaces had little to do with European kingdoms. Instead, the New World's holdings took their form and shape from the Indian territories they inhabited. These contested spaces throughout the western hemisphere were not unclaimed lands waiting to be conquered and populated but a single vast space, occupied by native communities and defined by the meeting, mingling, and clashing of peoples, creating societies unlike any that the world had seen before.

Contested Spaces of Early America brings together some of the most distinguished historians in the field to view colonial America on the largest possible scale. Lavishly illustrated with maps, Native art, and color plates, the twelve chapters span the southern reaches of New Spain through Mexico and Navajo Country to the Dakotas and Upper Canada, and the early Indian civilizations to the ruins of the nineteenth-century West. At the heart of this volume is a search for a human geography of colonial relations: Contested Spaces of Early America aims to rid the historical landscape of imperial cores, frontier peripheries, and modern national borders to redefine the way scholars imagine colonial America.

Juliana Barr is Associate Professor of History at Duke University and author of Peace Came in the Form of a Woman: Indians and Spaniards in the Texas Borderlands.

Edward Countryman is University Distinguished Professor at Southern Methodist University and author of several books, including The American Revolution, Americans: A Collision of Histories, and most recently Enjoy the Same Liberty: Black Americans and the Revolutionary Era.