The Commerce of Vision: Optical Culture and Perception in Antebellum America 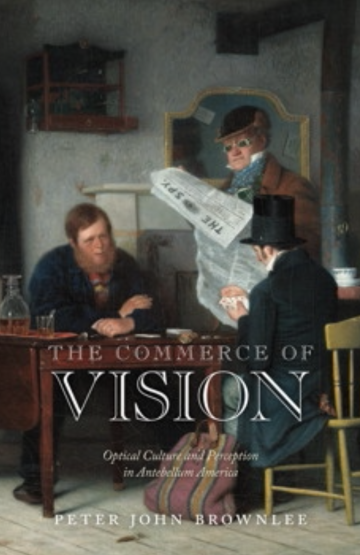 When Ralph Waldo Emerson wrote in 1837 that "Our Age is Ocular," he offered a succinct assessment of antebellum America's cultural, commercial, and physiological preoccupation with sight. In the early nineteenth century, the American city's visual culture was manifest in pamphlets, newspapers, painting exhibitions, and spectacular entertainments; businesses promoted their wares to consumers on the move with broadsides, posters, and signboards; and advances in ophthalmological sciences linked the mechanics of vision to the physiological functions of the human body. Within this crowded visual field, sight circulated as a metaphor, as a physiological process, and as a commercial commodity. Out of the intersection of these various discourses and practices emerged an entirely new understanding of vision.

The Commerce of Vision integrates cultural history, art history, and material culture studies to explore how vision was understood and experienced in the first half of the nineteenth century. Peter John Brownlee examines a wide selection of objects and practices that demonstrate the contemporary preoccupation with ocular culture and accurate vision: from the birth of ophthalmic surgery to the business of opticians, from the typography used by urban sign painters and job printers to the explosion of daguerreotypes and other visual forms, and from the novels of Edgar Allan Poe and Herman Melville to the genre paintings of Richard Caton Woodville and Francis Edmonds. In response to this expanding visual culture, antebellum Americans cultivated new perceptual practices, habits, and aptitudes. At the same time, however, new visual experiences became quickly integrated with the machinery of commodity production and highlighted the physical shortcomings of sight, as well as nascent ethical shortcomings of a surface-based culture. Through its theoretically acute and extensively researched analysis, The Commerce of Vision synthesizes the broad culturing of vision in antebellum America.

Peter John Brownlee is Curator at the Terra Foundation for American Art.