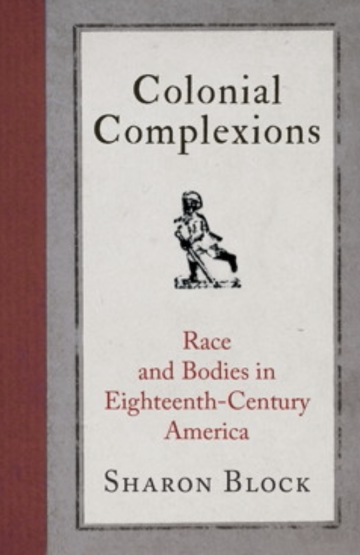 In Colonial Complexions, historian Sharon Block examines how Anglo-Americans built racial ideologies out of descriptions of physical appearance. By analyzing more than 4,000 advertisements for fugitive servants and slaves in colonial newspapers alongside scores of transatlantic sources, she reveals how colonists transformed observable characteristics into racist reality. Building on her expertise in digital humanities, Block repurposes these well-known historical sources to newly highlight how daily language called race and identity into being before the rise of scientific racism.

In the eighteenth century, a multitude of characteristics beyond skin color factored into racial assumptions, and complexion did not have a stable or singular meaning. Colonists justified a race-based slave labor system not by opposing black and white but by accumulating differences in the bodies they described: racism was made real by marking variation from a norm on some bodies, and variation as the norm on others. Such subtle systemizations of racism naturalized enslavement into bodily description, erased Native American heritage, and privileged life history as a crucial marker of free status only for people of European-based identities.

Colonial Complexions suggests alternative possibilities to modern formulations of racial identities and offers a precise historical analysis of the beliefs behind evolving notions of race-based differences in North American history.

Sharon Block is Professor of History at the University of California, Irvine.