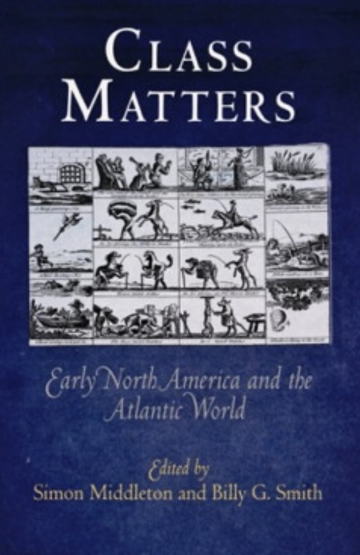 As a category of historical analysis, class is dead—or so it has been reported over the past two decades. The contributors to Class Matters contest this demise. Although differing in their approaches, they all agree that socioeconomic inequality remains indispensable to a true understanding of the transition from the early modern to modern era in North America and the rest of the Atlantic world. As a whole, they chart the emergence of class as a concept and its subsequent loss of analytic purchase in Anglo-American historiography.

The opening section considers the dynamics of class relations in the Atlantic world across the seventeenth and eighteenth centuries—from Iroquoian and Algonquian communities in North America to tobacco lords in Glasgow. Subsequent chapters examine the cultural development of a new and aspirational middle class and its relationship to changing economic conditions and the articulation of corporate and industrial ideologies in the era of the American Revolution and beyond.

A final section shifts the focus to the poor and vulnerable—tenant farmers, infant paupers, and the victims of capital punishment. In each case the authors describe how elite Americans exercised their political and social power to structure the lives and deaths of weaker members of their communities. An impassioned afterword urges class historians to take up the legacies of historical materialism. Engaging the difficulties and range of meanings of class, the essays in Class Matters seek to energize the study of social relations in the Atlantic world.

Simon Middleton is Senior Lecturer in American History at the University of Sheffield and author of From Privileges to Rights: Work and Politics in Colonial New York City, also available from the University of Pennsylvania Press.

Billy G. Smith is Professor of History at Montana State University and author of The "Lower Sort": Philadelphia's Laboring People, 1750-1800.