Art in a Season of Revolution: Painters, Artisans, and Patrons in Early America 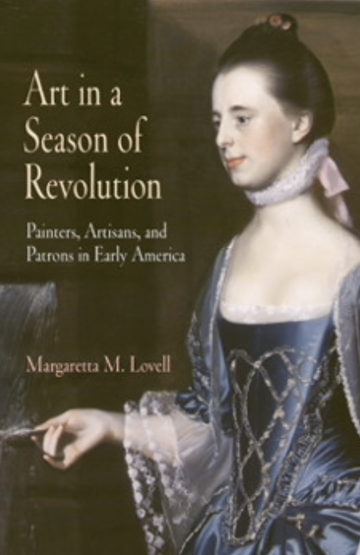 Focusing on the rich heritage of art-making in the eighteenth century, this lushly illustrated book positions both well-known painters and unknown artisans within the framework of their economic lives, their families, and the geographies through which they moved as they created notable careers and memorable objects. In considering both painting and decorative arts simultaneously, Art in a Season of Revolution departs from standard practice and resituates painters as artisans. Moreover, it gives equal play to the lives of the makers and the lives of the objects, to studying both within the interdependent social and economic webs linking local and distant populations of workers, theorists, suppliers, and patrons throughout the mercantile Atlantic.

Emphasizing maritime settlements such as Salem, Newport, and Boston and viewing them within the larger framework of the Atlantic world, Margaretta Lovell considers the ways eighteenth-century New England experience was conditioned by its source cultures and markets. Colonial material culture participated in a nonsubsistence international economy, deriving ideas, pigments, and conventions from abroad, and reexporting them in the effort to enlarge market opportunities or to establish artistic reputations in distant London. Exploring these and other key aspects of the aesthetic and social dimensions of the cultural landscape, Lovell concentrates on a cluster of central issues: the relevance of aesthetic production to social hierarchies; the nature and conditions of artisan career trajectories; the role of replication, imitation, and originality in the creation and marketing of art products; and the constituent elements of individual identity for the makers, for the patrons who were their subjects, and for the creations that were their objects.

Art in a Season of Revolution illuminates the participation of pictures, objects, and makers in their cultures. It invites historians to look at the material world as a source of evidence in their pursuit of even very abstract concerns such as the nature of virtue, the uses of identity, and the experience of time. Arguing in favor of a more complex approach to research at the nexus of aesthetic and ideological concerns, this provocative new book challenges established frameworks for understanding the production of art in British America during the tumultuous decades bracketing the Revolution.

Margaretta M. Lovell is Professor of Art History and Director of American Studies at the University of California, Berkeley. Her previous books include A Visitable Past: Views of Venice by American Artists, 1860-1915 and Venice: The American View, 1860-1920.