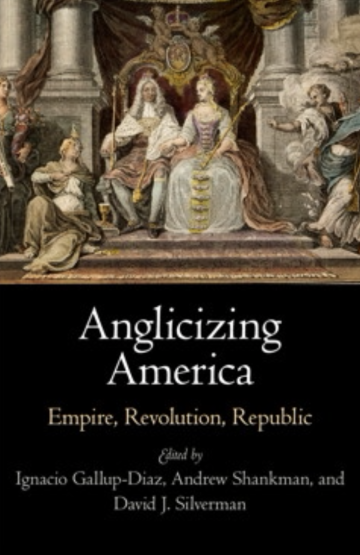 The thirteen mainland colonies of early America were arguably never more British than on the eve of their War of Independence from Britain. Though home to settlers of diverse national and cultural backgrounds, colonial America gradually became more like Britain in its political and judicial systems, material culture, economies, religious systems, and engagements with the empire. At the same time and by the same process, these politically distinct and geographically distant colonies forged a shared cultural identity—one that would bind them together as a nation during the Revolution.

Anglicizing America revisits the theory of Anglicization, considering its application to the history of the Atlantic world, from Britain to the Caribbean to the western wildernesses, at key moments before, during, and after the American Revolution. Ten essays by senior historians trace the complex processes by which global forces, local economies, and individual motives interacted to reinforce a more centralized and unified social movement. They examine the ways English ideas about labor influenced plantation slavery, how Great Britain's imperial aspirations shaped American militarization, the influence of religious tolerance on political unity, and how Americans' relationship to Great Britain after the war impacted the early republic's naval and taxation policies. As a whole, Anglicizing America offers a compelling framework for explaining the complex processes at work in the western hemisphere during the age of revolutions.

Ignacio Gallup-Diaz is Associate Professor and Chair of the Department of History at Bryn Mawr College. He is author of The Door of the Seas and Key to the Universe: Indian Politics and Imperial Rivalry in the Darién, 1640-1750.

Andrew Shankman is Associate Professor of History at Rutgers University and author of Crucible of American Democracy: The Struggle to Fuse Egalitarianism and Capitalism in Jeffersonian Pennsylvania.

David J. Silverman is Professor of History at George Washington University. He is author of Red Brethren: The Brothertown and Stockbridge Indians and the Problem of Race in Early America and Faith and Boundaries: Colonists, Christianity, and Community Among the Wampanoag Indians of Martha's Vineyard, 1600-1871, and coauthor of Ninigret, Sachem of the Niantics and Narragansetts: Diplomacy, War, and the Balance of Power in Seventeenth-Century New England and Indian Country.