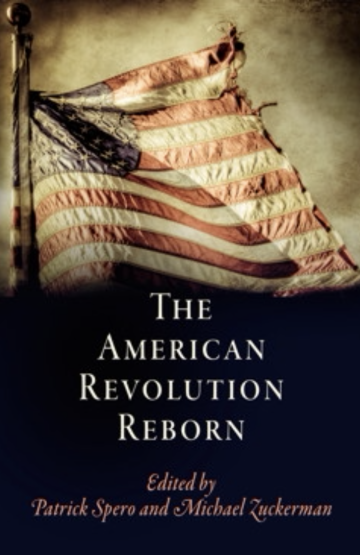 The American Revolution conjures a series of iconographic images in the contemporary American imagination. In these imagined scenes, defiant Patriots fight against British Redcoats for freedom and democracy, while a unified citizenry rallies behind them and the American cause. But the lived experience of the Revolution was a more complex matter, filled with uncertainty, fear, and discord. In The American Revolution Reborn, editors Patrick Spero and Michael Zuckerman compile essays from a new generation of multidisciplinary scholars that render the American Revolution as a time of intense ambiguity and frightening contingency.

The American Revolution Reborn parts company with the Revolution of our popular imagination and diverges from the work done by historians of the era from the past half-century. In the first section, "Civil Wars," contributors rethink the heroic terms of Revolutionary-era allegiance and refute the idea of patriotic consensus. In the following section, "Wider Horizons," essayists destabilize the historiographical inevitability of America as a nation. The studies gathered in the third section, "New Directions," present new possibilities for scholarship on the American Revolution. And the last section, titled "Legacies," collects essays that deal with the long afterlife of the Revolution and its effects on immigration, geography, and international politics. With an introduction by Spero and a conclusion by Zuckerman, this volume heralds a substantial and revelatory rebirth in the study of the American Revolution.

Patrick Spero is Librarian and Director at the American Philosophical Society Library. He is author of Frontier Country: The Politics of War in Early Pennsylvania, also available from the University of Pennsylvania Press.

Michael Zuckerman is Professor of History Emeritus at the University of Pennsylvania.