1812: War and the Passions of Patriotism 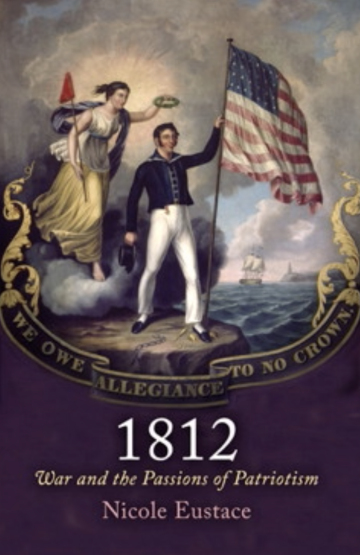 As military campaigns go, the War of 1812 was a disaster. By the time it ended in 1815, Washington, D.C., had been burned to the ground, the national debt had nearly tripled, and territorial gains were negligible. Yet the war gained so much popular support that it ushered in what is known as the "era of good feelings," a period of relative partisan harmony and strengthened national identity. Historian Nicole Eustace's cultural history of the war tells the story of how an expensive, unproductive campaign won over a young nation—largely by appealing to the heart.

1812 looks at the way each major event of the war became an opportunity to capture the American imagination: from the first attempt at invading Canada, intended as the grand opening of the war; to the battle of Lake Erie, where Oliver Perry hoisted the flag famously inscribed with "Don't Give Up the Ship"; to the burning of the Capitol by the British. Presidential speeches and political cartoons, tavern songs and treatises appealed to the emotions, painting war as an adventure that could expand the land and improve opportunities for American families. The general population, mostly shielded from the worst elements of the war, could imagine themselves participants in a great national movement without much sacrifice. Bolstered with compelling images of heroic fighting men and the loyal women who bore children for the nation, war supporters played on romantic notions of familial love to espouse population expansion and territorial aggression while maintaining limitations on citizenship. 1812 demonstrates the significance of this conflict in American history: the war that inspired "The Star-Spangled Banner" laid the groundwork for a patriotism that still reverberates today.

Nicole Eustace is Associate Professor of History at New York University and author of Passion Is the Gale: Emotion, Power, and the Coming of the American Revolution.