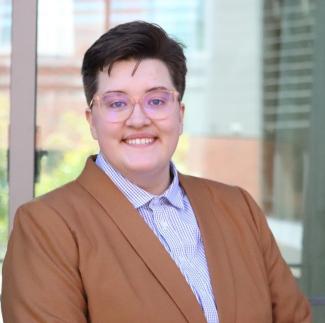 For Frances H. O’Shaughnessy, an Advisory Council Dissertation Fellow at the McNeil Center, the present-day Global Movement for Black Lives provides a powerful context for their research on the history of Black resistance during the Civil War and Reconstruction. O’Shaughnessy spoke with us about their research interests, the historians who give them inspiration, and the opportunities that today’s historians have to interpret and reinterpret early American history.

How did you become interested in your dissertation topic?

O’Shaughnessy: The Global Movement for Black Lives undeniably provides a present context for my interest in Black freedom struggles during the U. S. Civil War and Reconstruction. The figure of “the looter,” and the viral videos of Black youth stealing televisions and cheesecakes, seem to always garner more attention than the subject of the protests themselves, namely the state-sanctioned murders of Black people. Critiquing the value given to white property over Black life, Black organizers have confronted racial and sexual violence while fostering the creativity, heterogeneity, and malleability necessary for the social transformation of our world. I strive to be in solidarity with the Global Movement for Black Lives, as I work to consider a longer history of Black resistance against property and propriety.

Who is an influential historian/author that the world should know more about?

O’Shaughnessy: The dissertation title “Black Revolution” is in reference to W. E. B. Du Bois’s Black Reconstruction (1935), a foundational text for histories of the Civil War and Reconstruction. At the time of its publication, Black Reconstruction was largely ignored by the profession, which to this day has not received a review in the AHR. In the 1960s and 1970s, during the Black Freedom Movement, Black Reconstruction garnered renewed interest in the academy, particularly for Du Bois’s argument on Black people's self-emancipation during “the General Strike” and for his critique of racism within the discipline and contemporary life. Other aspects of Black Reconstruction, in particular his fierce critique of imperialism and militarism, have only recently been taken up and extended within the field, notably in Carole Emberton’s, Gerald Horne’s, and Moon-Ho Jung’s work. Even the state chapters, as seen in Thulani Davis’s latest monograph The Emancipation Circuit, have garnered renewed interest! I suspect other aspects of Black Reconstruction will re-enter the field as we grapple with new questions and challenges about the war and its enduring legacies.

What is something that you’ve read or watched recently, that other early Americanists may find interesting?

O’Shaughnessy: I have seen the documentary series The Last Dance probably three or four times. As a scholar who largely writes chronologically, the documentary’s cyclical structure between the early years of the Chicago Bulls and its 1997-8 season, moving in and out with individual stories about basketball players, provides an enriching perspective of their sixth championship. It has helped me re-think the temporal structure of my dissertation, which now has my first chapter end at the Emancipation Proclamation (1863) before I devote the two subsequent chapters to the early years of the U. S. Civil War.

What do you see as some of the challenges or opportunities that early Americanists are working on in the 21st century?

O’Shaughnessy: The crowd-sourcing archival projects of mass digitization and transcription make working in the field at this moment an incredibly exciting experience. The muster and descriptive rolls for the Black regiments, which before required a researcher to individually request for each soldier, now are readily available online, with a subscription, of course! The labor of everyday people transcribing the Freedmen’s Bureau records, moreover, has given scholars an ability to search the names of specific people, making it much easier to extend stories of African Americans who entered the archive during the war into Reconstruction. It is extraordinary how digital humanities have enabled the reinterpretation of history, just as they reveal the degree to which these stories matter to various publics, most especially to the descendants.

What do you find most enjoyable/rewarding about the research process?

O’Shaughnessy: Undeniably the most rewarding moments of the research process are when you find something that you least expect. During my time in South Carolina, I reviewed mostly the papers of enslavers, which largely are, as Saidiya Hartman has noted, inventories of property. The few sentences here and there about Black life are rather difficult to extend into conventional historical narratives. With time, however, you can find materials that exceed the perceived archival limit. In the Manigault papers at the South Caroliniana, I encountered a fugitive description and photograph of a formerly enslaved domestic named Dolly, which was supposed to be sent to the Charleston Police Station in April 1863. The cropped nature of the photograph, which depicts Dolly’s face and the back of a chair, suggests its bottom half likely had her sitting and holding a white child. A rather stunning image to see in the archive, to say the least! Removed from the city during the war, Dolly’s presumed return to Charleston from Augusta, Georgia as a self-emancipated Black woman, which her former enslaver could only explain as being “enticed off by some White Man,” stays with me each time I write about Black women’s fugitivity. The very thought that Dolly, a “house servant,” with “no fault ever having been found with her,” could self-emancipate herself through movement, proved unthinkable for the Manigaults, even when confronted with the fact of her escape. Dolly’s story, and other stories which challenge what we think we know about the past, makes the research process worthwhile.

Frances H. O’Shaughnessy is an Advisory Council Dissertation Fellow at the McNeil Center and a doctoral candidate in the Department of History at the University of Washington. To learn more about O’Shaughnessy’s work, view their dissertation summary.