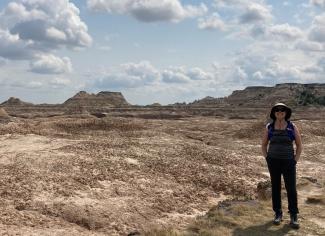 Understanding cities of the past

Molly Nebiolo, a Friend of MCEAS Dissertation Fellow, is focused on early American urban history. She is drawn to the way people of the present try to understand living in cities of the past. In this Q & A, she talks about healthy living in early American cities, a movie that she would love to discuss with other historians, and her dream research trip.

What drew you to the study of early America?

Nebiolo: I was always interested in the early modern period. In college, my advisor was a medievalist, and I wrote an honors thesis on the evolution of barber surgery and the cultural acceptance of surgery as a profession in the early modern period. But when looking at universities for my Ph.D., I really clicked with my current advisor, Chris Parsons, who urged me to look more to the early Atlantic world for my doctoral work. As is often the case while doing dissertation work, I seemed to have found myself with a project on vast early America! Growing up in Connecticut, I was force-fed Puritan/colonial New England history, so I always had an aversion to it. But since studying it in graduate school, I have come to appreciate, enjoy, and contribute to early American historiography.

How did you become interested in your dissertation topic?

Nebiolo: I initially wanted to write a thesis on gender, midwifery, and early America, but I was always drawn to the way people of the present try to understand living in cities of the past. I did some urban studies research for a professor at MIT, and I think that work helped me to articulate some of the questions I’ve had around healthiness and urbanization during early colonization. The narratives around early modern cities are often very extreme — people were always dying from major outbreaks, cities were extremely dirty, revolutionary ideas led to revolutionary acts on the streets, fires destroyed everything — but I wanted to engage with some of the more “boring” everyday experiences that influenced ideas of pursuing a healthy life in a city.

Who is an influential historian/author that the world should know more about?

Nebiolo: My answer is broader and more historiographic than just listing a couple authors. I think early Americanists should pay more attention to some of the colonial work being written about Latin and South America. Many of these scholars are doing some fantastic work on manumission, the agency of the enslaved, health, and urbanization that should be better incorporated into syllabi and reading lists on the early American period.

If you could see or visit a particular historical artifact, what would it be and why?

Nebiolo: I would love to visit some of the diverse colonial cities that still exist to some extent across the Atlantic world. I think travelling as far north as Newfoundland and Quebec, and as far south as the Caribbean and Rio de Janeiro would be really fascinating to see what remains, why, and what it says about colonial city-making. To me, the experiential is as interesting as going to an archive to see a particular artifact. If anyone wants to fund this research trip, please let me know.

What is something that you’ve read or watched recently, that other early Americanists may find interesting?

Nebiolo: I would love to sit down with scholars to discuss the indigenous and colonial representations found in the Prey movie that was released on Hulu this summer. Hands down the best of the Predator movies, and — I would argue — of the larger Alien franchise. The cast, the filming, and the location were stunning, and the movie is a creative example of “seeing” parts of North America in the 1710s.

What do you see as some of the challenges or opportunities that early Americanists are working on in the 21st century?

Nebiolo: I believe there needs to be some major reform in primary and secondary education, particularly in how history is taught to students. I think that having a student body, and often a population of non-academics, who have very specific ideas of what the early American period really means and the history it covers contributes to the overinflation of certain ideas and the use of extreme historical narratives for political agendas. Based on most of the current scholarship I see my colleagues producing, I am excited to see how early America will be taught in coming years. So, I do believe our current political climate is an opportunity to update historical narratives. Specifically, how certain perspectives and voices are highlighted and taught in history courses. I also hope critical analysis skills we are practicing can be better taught to undergraduates so they can better engage with the world around them and understand why history is important.

What is a fun fact about you?

Nebiolo: I played on the only co-ed lacrosse team in Connecticut when I was in middle and high school (and one of only three women who were on the team).

What do you find most enjoyable/rewarding about the research process?

Nebiolo: I think the most enjoyable and rewarding parts of the research process are the time we get to think creatively and our ability to ask questions from and about our materials.

What are you most looking forward to during your Fellowship at the McNeil Center?

Nebiolo: I know I’ve found the experience of presenting a brown bag paper to McNeil to be very generative, so I look forward to (hopefully!) helping this year’s presenters in a similar way. I’m also excited to get to know the other fellows this year.

Molly Nebiolo, pictured during a recent trip to the Badlands National Park, is a Friends of MCEAS Dissertation Fellow and a Ph.D. Candidate at Northeastern University. She earned her B.A. in History and Biological Sciences from Butler University and her master’s and a graduate certificate in digital humanities from Northeastern University while working towards her Ph.D. To learn more about Nebiolo’s work, view her dissertation summary or visit her website.