Taking action on the climate crisis as early Americanists 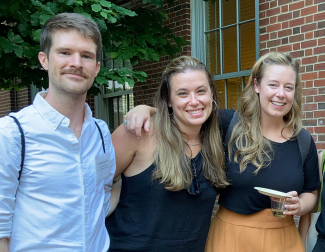 In what ways do the roots of the current climate crisis lie in early American history and why does it matter? This June, the McNeil Center teamed up with the Environmental Historians’ Action Collaborative, the Early Modern Studies Institute at the University of Southern California, and the Penn Program in Environmental Humanities to examine this question in “The Climate Crisis: Early Americanists Respond,” a conference featuring 25 presenters and a keynote address by Liz Ellis, Co-Director of the Native Studies Forum and Assistant Professor of History at New York University.  (Pictured above are presenters Gustave Lester, Hayley Negrin, and Kate Mulry.)

Emily Pawley of Dickinson College began the two-day conference by laying out its goal: to build a community of people who are practiced in talking about the history of climate change. Around this goal, the presenters looked at a breadth of topics, including how to teach climate history in the classroom, historical adaptations to climate change particularly around our waterways, politics and conflict around environmental issues, effects on health equity and reproduction, the climate impacts of slavery, indigenous communities on the front line of climate crisis, and the roots of environmental injustices.

Anya Zilberstein of Concordia University noted that the study of early American climate history is also a study of today’s climate crisis. “Any number of issues that began in early America continue to have an afterlife in the current times,” Zilberstein said.

What can historians do about it? A recurring theme of the conference focused on activism. How can early American climate historians take an active role in healing the climate? While it may be more common to look to climate scientists and data analysts for solutions, the role of historians and the humanities should not be overlooked.

“We are the experts in decoding how and where the climate crisis began,” said Joyce Chaplin of Harvard University. “Power, law, how societies take shape, questions of climate injustice, the local geographies: these areas are a tool kit” that historians and the humanities can bring to the conversation.

Keith Pluymers of Illinois State University concurred. “History as an action-oriented word was a theme that came out of this conference,” he noted. Pawley pointed out that climate historians can contribute to climate science discussions in ways that data scientists or policymakers may not be able to, with an eye toward historical through lines, including power dynamics, social justice, geographical justice, and the precedents set in motion by historical events.

“Even as a historian who does not specialize in climate history, I found it extremely valuable to take part in this conference. We should all be concerned about the climate crisis, and early America’s role in its origins and character,” said Emma Hart, the Richard S. Dunn Director of the McNeil Center for Early American Studies. “Our center was thrilled to be able to host the event, and we look forward to more collaborations with these partners.”

Equally important was that the hybrid conference debuted a new model for running an in-person event with a low-carbon footprint, cutting down on travel emissions by hosting a hub in both Los Angeles and Philadelphia, choosing a caterer with the highest environmental standards, serving no meat, and offering a virtual option for attendees who were too far away to commute by low-carbon or public transportation.