Stuyvesant Bound: An Essay on Loss Across Time 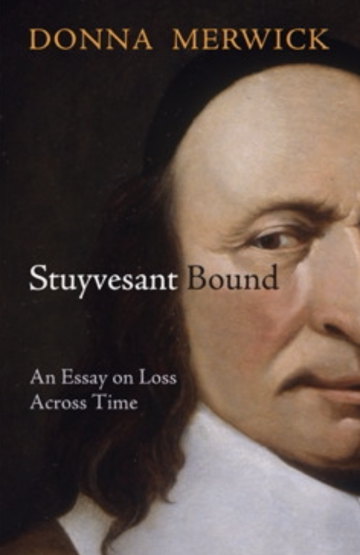 Stuyvesant Bound is an innovative and compelling evaluation of the last director general of New Netherland. Donna Merwick examines the layers of culture in which Peter Stuyvesant forged his career and performed his responsibilities, ultimately reappraising the view of Stuyvesant long held by the majority of U.S. historians and commentators.

Borrowing its form from the genre of eighteenth- and nineteenth-?century learned essays, Stuyvesant Bound invites the reader to step into a premodern worldview as Merwick considers Stuyvesant's role in history from the perspectives of duty, belief, and loss. Stuyvesant is presented as a mid-seventeenth-century magistrate obliged by his official oath to manage New Netherland, including installing Calvinist politics and belief practices under the fragile conditions of early modern spirituality after the Protestant Reformation. Merwick meticulously reconstructs the process by which Stuyvesant became his own archivist and historian when, recalled to The Hague to answer for his surrender of New Netherland in 1664, he gathered together papers amounting to almost 50,000 words and offered them to the States General. Though Merwick weaves the theme of loss throughout this meditation on Stuyvesant's career, the association culminates in New Netherland's fall to the English in 1664 and Stuyvesant's immediate recall to Holland to defend his surrender. Rigorously researched and unabashedly interpretive, Stuyvesant Bound makes a major contribution to recovery of the cultural and religious diversity that marked colonial America.

Donna Merwick is Senior Fellow in the Department of History at the University of Melbourne, Long Term Visiting Fellow at Australian National University, and Adjunct Associate Professor in the Swinburne Institute for Social Research at the Swinburne University of Technology. She is the author of many books, including The Shame and the Sorrow: Dutch-Amerindian Encounters in New Netherland, also available from the University of Pennsylvania Press, and Death of a Notary: Conquest and Change in Colonial New York.