Subjects unto the Same King: Indians, English, and the Contest for Authority in Colonial New England 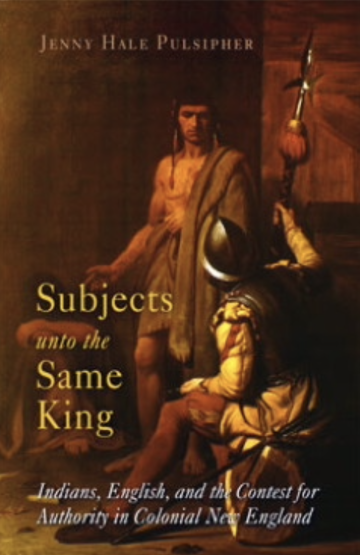 Land ownership was not the sole reason for conflict between Indians and English, Jenny Pulsipher writes in Subjects unto the Same King, a book that cogently redefines the relationship between Indians and colonists in seventeenth-century New England. Rather, the story is much more complicated—and much more interesting. It is a tale of two divided cultures, but also of a host of individuals, groups, colonies, and nations, all of whom used the struggle between and within Indian and English communities to promote their own authority.

As power within New England shifted, Indians appealed outside the region—to other Indian nations, competing European colonies, and the English crown itself—for aid in resisting the overbearing authority of such rapidly expanding societies as the Massachusetts Bay Colony. Thus Indians were at the center—and not always on the losing end—of a contest for authority that spanned the Atlantic world. Beginning soon after the English settled in Plymouth, the power struggle would eventually spawn a devastating conflict—King Philip's War—and draw the intervention of the crown, resulting in a dramatic loss of authority for both Indians and colonists by century's end.

Through exhaustive research, Jenny Hale Pulsipher has rewritten the accepted history of the Indian-English relationship in colonial New England, revealing it to be much more complex and nuanced than previously supposed.