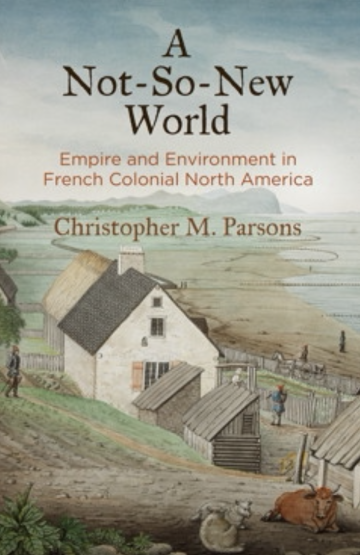 When Samuel de Champlain founded the colony of Quebec in 1608, he established elaborate gardens where he sowed French seeds he had brought with him and experimented with indigenous plants that he found in nearby fields and forests. Following Champlain's example, fellow colonists nurtured similar gardens through the Saint Lawrence Valley and Great Lakes region. In A Not-So-New World, Christopher Parsons observes how it was that French colonists began to learn about Native environments and claimed a mandate to cultivate vegetation that did not differ all that much from that which they had left behind.

As Parsons relates, colonists soon discovered that there were limits to what they could accomplish in their gardens. The strangeness of New France became woefully apparent, for example, when colonists found that they could not make French wine out of American grapes. They attributed the differences they discovered to Native American neglect and believed that the French colonial project would rehabilitate and restore the plant life in the region. However, the more colonists experimented with indigenous species and communicated their findings to the wider French Atlantic world, the more foreign New France appeared to French naturalists and even to the colonists themselves.

Parsons demonstrates how the French experience of attempting to improve American environments supported not only the acquisition and incorporation of Native American knowledge but also the development of an emerging botanical science that focused on naming new species. Exploring the moment in which settlers, missionaries, merchants, and administrators believed in their ability to shape the environment to better resemble the country they left behind, A Not-So-New World reveals that French colonial ambitions were fueled by a vision of an ecologically sustainable empire.