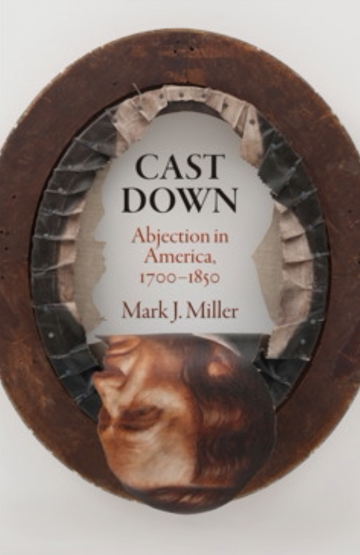 Derived from the Latin abiectus, literally meaning "thrown or cast down," "abjection" names the condition of being servile, wretched, or contemptible. In Western religious tradition, to be abject is to submit to bodily suffering or psychological mortification for the good of the soul. In Cast Down: Abjection in America, 1700-1850, Mark J. Miller argues that transatlantic Protestant discourses of abjection engaged with, and furthered the development of, concepts of race and sexuality in the creation of public subjects and public spheres.

Miller traces the connection between sentiment, suffering, and publication and the role it played in the movement away from church-based social reform and toward nonsectarian radical rhetoric in the public sphere. He focuses on two periods of rapid transformation: first, the 1730s and 1740s, when new models of publication and transportation enabled transatlantic Protestant religious populism, and, second, the 1830s and 1840s, when liberal reform movements emerged from nonsectarian religious organizations. Analyzing eighteenth- and nineteenth-century conversion narratives, personal narratives, sectarian magazines, poems, and novels, Miller shows how church and social reformers used sensational accounts of abjection in their attempts to make the public sphere sacred as a vehicle for political change, especially the abolition of slavery.